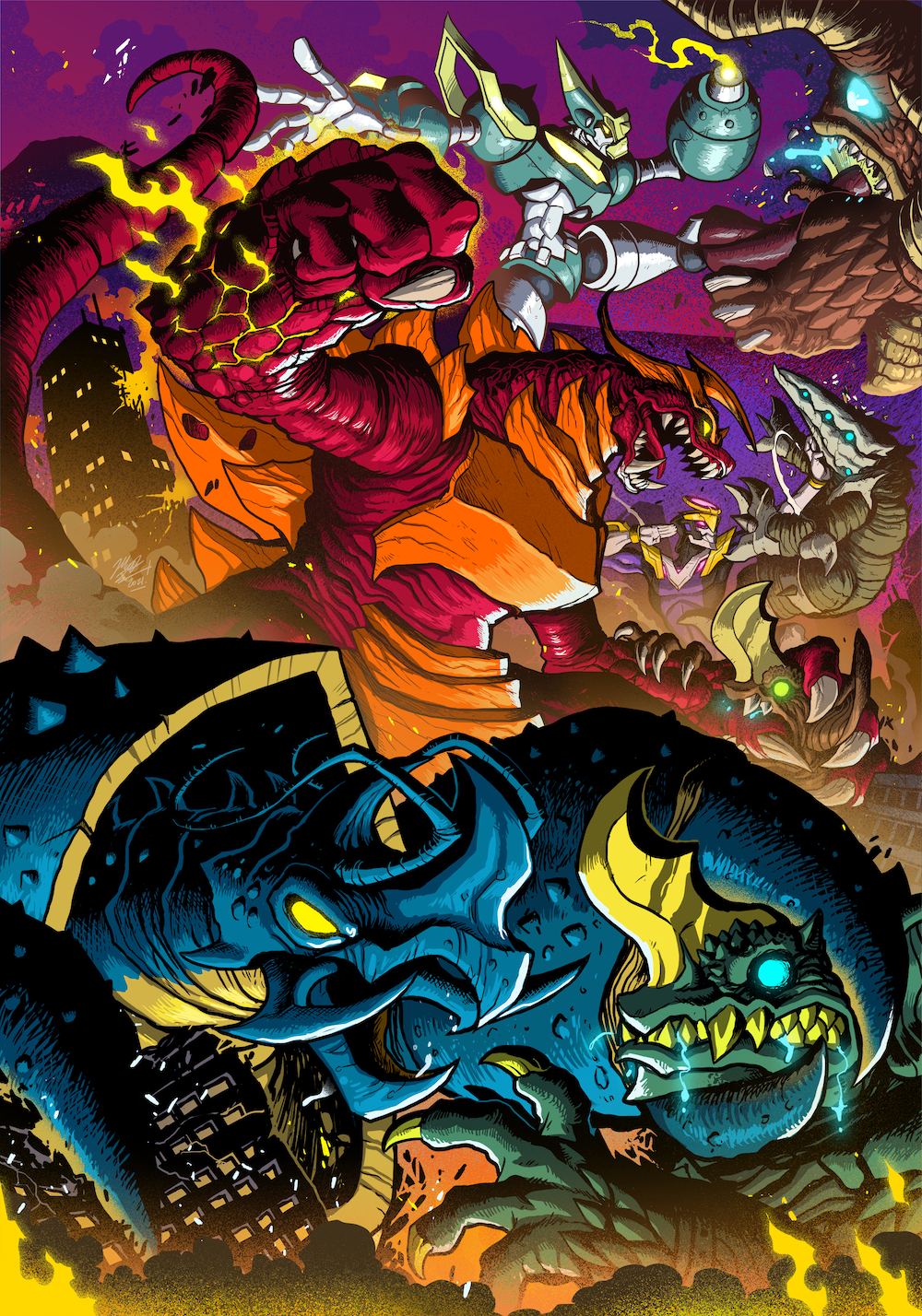 For nearly two centuries, mankind has had to live with the sudden rise of giant monsters emerging from the depths of the Earth. These ancient beings, known as kaiju, came from the depths of the "Hollow Earth" - an ancient subterranean ecosystem deep within the Earth - to reclaim dominion over the surface realm after a 5,000 year dormancy. For many individuals, they sought peaceful refuge upstairs from the hostile overcrowding eden below; while others sought for violent conquest and domination to establish a new brutal dynasty. Whichever their goals, their arrival had caused a rude awakening for humanity; being thrusted into a new war of terrifyingly titanic proportions.

Forced to act together, humanity was quick to establish the Kaiju Defense Network (KDN), a specialized defense force responsible for protecting humanity against their new enormous neighbors. Originally acting as a branch of the UN to document and contain kaiju, the KDN has evolved to become the primary bulwark of mankind by creating giant mechs and powerful "state-of-the-art" weapons and gear to sport a fair and fighting chance against their enemy. They fought furiously on both fronts, both when defending cities and when going on the offensive in campaigns to quell the kaiju population. Their efforts had saved the lives of countless people and saved over millions in damages over the course of their service.

But as the never-ending war continued, by 2036, the two sides had eventually reached a stalemate in what would be called "The Great War". No matter what either side did, they would find themselves unable to completely eradicate each other. Most kaiju would become disinterested with humanity and strive to live in piece on the most remote of islands and landmasses; while mankind continued to fortify and prepare for the next great offensive. By the time the lines were drawn once more, the cataclysmic devastation and terraforming on Earth done in their wake was immeasurable. Cities would find themselves completely, or partially, flattened while global warming and nuclear fallout forced both the destruction and creation of unique ecosystems around the world. Human factions would begin popping up randomly across the world, usually as secret organizations rivaling the KDN in tech and acting as local defenders of their factions.

During this uneasy peace between the two sides, humanity became interested in learning more about the many secrets and mysteries of the kaiju species, both on a biological and ecological level. The KDN's eventual discovery of the "Hollow Earth" have caused a major spike of interest and they have since been working on establishing research bases to study their subterranean reality. On the other hand, various crime organizations had been collecting and harvesting kaiju blood, bones and organs to be sold on the black market. It's not uncommon for these kaiju to be put on display and sold, either to engage in brutal cage fights or for other illegal purposes. However, some people wanted to see if both sides could truly coexist without the use of violence and hostility and use the knowledge they learn to make this a reality, ranging from passionate activists to stoic and maniac cults.

The kaiju would find solace by their lonesomes, with some veterans of the Great War establishing tribes. They teach the ways of their ancestors to those in their tribe, passing down valuable knowledge and lore in the process. Eventually, some of these tribes would grow to become massive kingdoms encompassing a whole variety of kaiju united under a single ruler. Many would often fight themselves over various reasons, ranging from acquiring territories to ideologies. Yet while many vengeful individuals still intend to cause trouble towards the humans, some kaiju would find common ground with the human activists chanting for their protection. Thus, certain kaiju would take the mantle as guardians of Earth, restoring balance to the damaged world whenever possible. Still, while skirmishes often take place between the two sides, neither were quite yet able or willing to go through another major war and risk eradicating more of their fragile planet... (yet anyways).

And good thing too. For as Earth entered a new uncertain age, they were blissfully unaware that they were being watched by prying eyes from within the cosmic void of space; studying their blue planet with ominous intent while silently making their next move...

I just got into Kaiju No. 8. Would humans have a fighting chance here?

I have yet to read through all the information but definitely interested.

Trying to do a character sheet but tad confused with when it comes to powers. Does each power require so many points i.e. if I wanted flight, extra appendages, and elemental mastery would that cost 2,4,2 points respectively from the 25 points total?

Quina Quen said:
I just got into Kaiju No. 8. Would humans have a fighting chance here?
Click to expand...

Surprisingly yes; at least against the minor classes. That being said, it certainly won't be easy!

Trying to do a character sheet but tad confused with when it comes to powers. Does each power require so many points i.e. if I wanted flight, extra appendages, and elemental mastery would that cost 2,4,2 points respectively from the 25 points total?
Click to expand...

That's my bad. May or may not have forgotten to elaborate just a bit more with the power implication. Originally my idea regarded to the slots being equivalent to the amount of points; so it could fit either three 1 point spells or one two-point spell and a 1 point spell. Each time you complete a mission/campaign portion, you can gain a slot (sorta like a level up). You can use said slot to immediately put down an ability or wait up to get something more powerful

It's a bit rigid, maybe a bit limiting, but remember this is the beginning of your character and the more you fight and participate, the stronger you'll become. That being said, if people aren't exactly happy with this - I can add another starting slot for better flexibility.

Or maybe better, have 5 slots open; pick any power aside from [5 pointers] and then continue with gaining slot points.

^ Edit: I think this is a way better/flexible system in this instance, so we'll use the 5 slot method.
Last edited: Friday at 12:34 PM

For those interested what kind of characters are you thinkin?

I have a campaign idea that I'm brainstorming - which features 1 story but with the 2 sided perspective of the kaiju and KDF sides respectively - and I have a pretty good "intro situation" regarding the kaiju side.

I might downgrade it as an intro mission (sorta like a "Mission 0" for the kaiju) and start the campaign afterwards. Same with the KDF probably~

Would a Steve Irwin type of character be allowed

Killerclown said:
Would a Steve Irwin type of character be allowed
Click to expand...

Like a kaiju biologist/activist? Sure! I'm definitely down for that~

We need a chat page. I don't wanna spam this but I wanna xhat with yall some

And maybe a rugged outdoorsman wanting to actually document Kaiju, with no camera crew because no crew is insane enough to do that

Mistory said:
We need a chat page. I don't wanna spam this but I wanna xhat with yall some
Click to expand...

I'll make a discord server a bit later. Just waiting for a few more eyes, but 6 interested players is already a good number.


Killerclown said:
And maybe a rugged outdoorsman wanting to actually document Kaiju, with no camera crew because no crew is insane enough to do that
Click to expand...

The KDN may help with that - sounds real promising!

Not sure if he's Australian or not.

Hey. I'd love to participate

Been awhile, my friend! Nice to see you back~

Develius said:
Been awhile, my friend! Nice to see you back~
Click to expand...

Same, but I lost that picture you made me. My previous phone broke and I couldn't recover the image from it.

My guy's fascination with Kaiju started in childhood when he learned that Kaiju were more intelligent than he thought they were.
Possibly from an encounter from one that surprisingly didn't end badly
Hopefully that isn't lore breaking

Gundam Watcher 27 said:
Same, but I lost that picture you made me. My previous phone broke and I couldn't recover the image from it.

I would love to rep it though if I am able to
Click to expand...

I should have it somewhere~ I'll DM you it

Develius said:
I should have it somewhere~ I'll DM you it
Click to expand...

We could use the OOC thread instead of discord
You must log in or register to reply here.