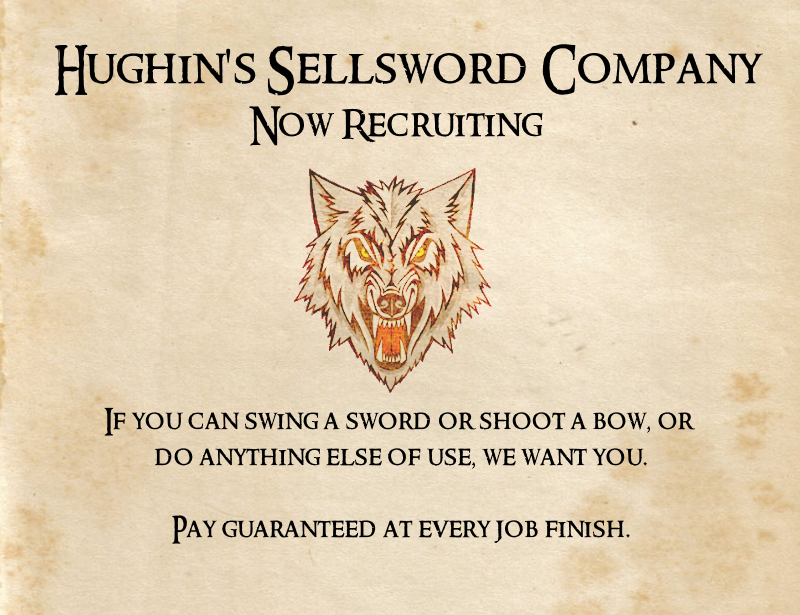 In the year 1578 of the First Era, tensions brew throughout the known world as steel clashes and blood is spilled. The North bleeds with infighting and scheming as the lords and stewards fight for influence and dominance among the jarldoms, the Riverlands burn as two of its greatest kingdoms fight to the bitter end against one another, and the Vale in a standoff between the greatest realms of Men with one another, all the while wary eyes rest upon the new strongholds of demons established across Argos. And worse yet, whispers of a terrible threat emerge from legends of the lost lands of Pengiros…

Though it is in these times of conflict and war, for this in the market for it there is profit to be made through the profession of a sellsword. Mercenary work is not for the faint of heart and often breaks even the strongest of men but for those who desire coin then there is work to be done.

In the city-state of Gwell in the Riverlands, the capital of mercenary companies and brothels alike, a new regiment has arisen and is eager to hire help to fill its new ranks: Hughin’s Sellsword Company. It is here that the story of those that join this fated company will go from taking what seems to be a simple job, escorting an Utterlin barge, to an adventure that will shape the destiny of the world itself in the face of insurmountable odds and hardship. Now is the time to make your mark on the world.

Disclaimer (PLEASE READ):
This will be an 18+/R rated RP as I do wish to have the realism and grittiness of somewhat lower fantasy infused into a high fantasy settings. Violence, foul language, and mature themes are to be displayed throughout the story and world.

General Guidelines:
-No lore-breaking or overpowered characters. The specifics of this can be discussed with me in regard to what you specifically want to create.
-No inappropriate lore/characters/etc (nothing explicitly lewd or offensive).
-If you are interested in joining, the kind of posters I am seeking are people who are consistent and committed to participating in a long, overarching storyline that will likely take a very long time to get through and has both good grammar and spelling.

Posting Conduct:
-I’m lenient on post sizes such as for dialogue and conversations I can understand if you only write a sentence or two, but I expect a decent level of quality with regards to writing and developing your character.
-Under NO circumstances will there be flaming or harassment either in OOC or IC as I will tolerate neither.
-No metagaming/powergaming.
-This is a primarily PvE game, with special exceptions for PvP should members of both parties agree to it and is run by me.
-Long periods of inactivity will lead you to being booted from the game and your character being brought under my control.
-As GM, my will is the will of the universe in this game. New rules can be implemented on the fly when needed.

Lore and Character Information:
-Lore of the world and many things within it can be read on the Wiki I have created for my setting that is *mostly* complete that I plan to finish at some point.
Link: Arva Wiki

-Characters creation can fall into what I have already created, or into something you have in specific which we can discuss specifics in how to fit it into the world whether it’s a new kingdom or race or something else not necessarily described.

-Character creation should involve art that isn’t anime or cartoonish, though if no art is available for an idea of yours then I am more lenient on the latter.

Interested?
Send me a message on RPN or on Discord (joshuadim#4836) and we can discuss your character creation and any other questions you might have! Looking forward to seeing you. Slots *are* limited to 4 open slots at the moment, so don't hesitate!

Sweet! We can discuss further in the site's private messaging for questions that you might have or anything else

Bumping with an update, only two slots remain open!

If you are interested, feel free once again to reach me on Discord or on RPN's private messaging.

Bumping to update that all slots are now full! If you didn't get a chance to join, feel free to watch the main thread when it comes up in the next few weeks to read along on the adventure.
You must log in or register to reply here.