Daisie for the June and July badges.​

Roleplay of the MonthA Night Bleeds by

The blood moon is nothing supernatural, science tells us it occurs when Earth's moon is in a total lunar eclipse. Makes sense, only the humans can't see past the blinders of normality forced onto their heads. They walk around, living their day to day lives in ignorant bliss. A bliss not bestowed upon those who dabble in the supernatural, or those who are a being of supernatural origin. They have the great fortune, or misfortune, to see the truth. Every time they look up at the night sky, they see it, in all its horrifying, perverse beauty.

It started with the full moon a month ago. At first glance, it appeared to be a blood moon and magicians checked the calendar for a lunar eclipse. Shifters, already attuned to the moon and all her phases, felt the wrongness of it in their bones. Vampires, didn't really give a shit at first, and the non-human races felt it was a trick being played upon their senses. Only when they stared at the moon, watched it for several minutes, were they able to see the difference.

The sanguine undulated, like an unwanted caress, across the surface of the moon. Everywhere the moonlight touched became tainted, covered with the same blood red hue. The night sky was drastically changed, nothing looked the same. Even the animals reacted, hiding in their caves, huddled against one another in the branches of a crimson colored tree. The forests were silent, air thick with some imagined dark prophecy, and still it could not be denied.

What are some of the things that inspired you to create this roleplay?
I had no idea what, and played with one of those random band name generators. A Night Bleeds came up, and the RP name was set. I've always loved shifters and supernatural creatures, and it is what I've usually roleplayed in the past. Usually some homebrew version of DnD, World of Darkness, and various television and movie inspirations. The Magicians, The OA, Shannara Chronicles, Game of Thrones, so many great and almost great ones out there.

Once I had the title, the rest started to just fall into place. I built the core of the RP around the moon bleeding. Why was it bleeding? How did it affect characters? How could they stop it? Would they stop it? It's been really fun coming up with the idea and various plot branches possible.

What has made your roleplay successful?
A combination of 'the perfect storm' so to speak. The roleplays I've been in all felt more like a wide open sandbox, which can be fun, but also leaves it open to fading quickly. I wanted to approach this as more of a GM role, like a tabletop campaign. My NPCs allow me to be in the story, but they aren't the story. They are there to give the players someone to interact with, and to help guide the storyline overall.

I also think it helped to start as soon as I had two player characters rather than waiting for weeks to have a full crew. They started out separated, interacting with one of my NPCs directly. Which I feel gives a chance to work out the character voice, writing, get a feel for the personality, on both sides.

Discord plays a huge part as well. At first it was just a place to keep all the OOC chat, and lore and announcements. But very quickly morphed into a collaboration of all the players behind the characters. We started shared plotting, not just for their own characters, but for each other's characters. I had a couple of players volunteer to assist with some of the game master things behind the scenes. They help with developing character arcs without having the story spoiled for themselves.

Also, for some of the smaller encounters, where there is a lot of quick actions back and forth, or dialogue, we have discord channels. They can go back and forth at a quicker pace, and when finished I compile the posts into one 'GM' post. Discord has become a very integral part of communication, both OOC and IC, and some really great ideas are shared by everyone. I want to make sure the players all have a character arc, character growth, and moments in the spotlight. And above all, have fun.

How did you start roleplaying?
Sixth grade, they had a Lord of the Rings tabletop game we played with a teacher after school. Way back in the day this was, but then I came across Dungeons and Dragons, and the world of roleplaying opened up. Since then, I've played various tabletop games, and moved into online roleplay via chat rooms in the days of AOL, and graduated to online forums and email.

I've always had an active imagination, having had to keep myself entertained after school while my parents worked (latchkey kid), and 'daydreamed' a lot. From characters in movies I particularly liked, to characters I created, I would toss them into scenes in my head and make stories based on their encounters.

Is there any other fond memory you have from roleplaying that you would like to share?
There are quite a few, too many to narrow down really. My favorite roleplays are the written ones, by far. The ones I can read again years later, and still laugh, cry, and 'awww' over the story and characters. That's what I aim for, whether the GM or a player in someone's RP. I want to have a connection to the story, or character, or both, strong enough that I can remember it even years later by re-reading a scene in the story, and feel that same emotion all over again.

Do you have something in mind for your next roleplay? Can we get a few hints?
I'm treating A Night Bleeds like Season One of an overall story. Thanks to that random band name generator, I already have a name for Season Two. "If December Freezes". The ending of Season One isn't set it stone, the players might succeed, they might not. However it ends, I plan on taking a week or two to hammer out the core of the next season and then will kick it off. Hopefully, that isn't for a while still. There's a lot more surprises in store for the player characters in Season One. And it wouldn't be a season without a heck of a cliffhanger.

How did you discover RpNation?
I found RPNation when looking for a place to pick up some roleplay after a long time RP partner became unavailable. At first I tried joining RPs, 1x1 and groups, only to find them effectively dying after a couple of weeks, or never getting off the ground. So I decided to run one of my own.

Featured DiscussionHow Much of a Character do You need to Know Before Portraying Them? by

Crow
How well should writers understand a canon fandom character before writing them in stories? Is there any method to measuring this?

TPBx
Check out this gallery of art which showcases a traditional medium.

Member of the Month 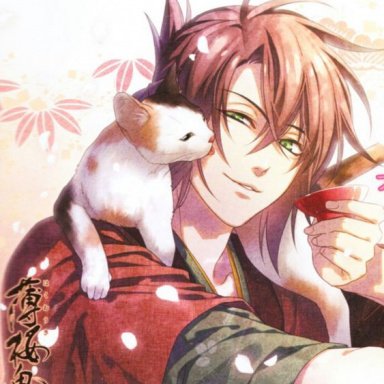 When did you start roleplaying?
Oh man, this is going to age me a bit. XD 1998 on Yahoo chat.

How did you discover RpNation?
It's hard to remember, but I believe I saw it mentioned in passing somewhere and decided to Google for it. Originally I just wanted a site with a big user base so I could find some Shinsengumi RP, given that it's extremely uncommon to find people who are into Shinsengumi-based media or history who also roleplay. I didn't know anyone here but it looked like a fun place to dive into.

You mention historical roleplays a lot. What are some of your other favorite genres/settings to roleplay in?
I love fandom RPs. :3 I'm in an extremely long running Bleach 1x1 offsite, and also a small Naruto group on RPN. It's OCs only for the most part in my fandom RPs. Original fantasy settings are fun too, and I am in a Chinese wuxia/xianxia-style RP with someone I met here, in a setting we developed together. Genre-wise I'd say I really like anything with politics in it, and comedy. I also want to stuff mythology and folklore into my favourite genres! If those are genres.
I wasn't sure if power of friendship or romance are genres or just ... fun character interactions... but you can stuff those in too if they fit.

Are there any hobbies that you enjoy outside of roleplaying, too?
Hobbies other than roleplaying... there are ... other hobbies? Well I absolutely love reading comics - all comics, including graphic novels and manga, and books - even ones without pictures. I love drawing, but I'm not sure if I can count that as a hobby since it's also a job? I think it's probably a crossover activity. XD Playing board games when there isn't a quarantine. I also love hanging out in nature but I can't do much of that at the moment.

Got any RpNation projects that you would like to share?
My project is to reply to each and every thread in the Roleplay Discussion section!
I would also love if people joined in my Roleplay Oscars Nomination thread... but ya know, no pressure.

Owen Hart for Hall of Fame

Moderator
Special thanks to

AEONmeteorite for the header art and for the s’more shark.

Heeey I forgot it was august today! Thanks for the feature.

Musician said:
Special thanks to

AEONmeteorite for the header art and for the s’more shark.
Click to expand...

That would make a good design for the merch!

Crayons from another site!

How long has it been?

Crayons from another site!

Which site was it? I don't recognise you, sorry!

Crayons said:
Which site was it? I don't recognise you, sorry!
Click to expand...

T5
I was Illyasviel

Nope not me. XD

This one is just your standard Crayola brand 24 variation. Doesn't even include a crayon sharpener.

This one is just your standard Crayola brand 24 variation. Doesn't even include a crayon sharpener.
Click to expand...

Why are you telling everyone my secrets? I thought we were friends!

Moderator
I'm just bummed that I didn't get what I asked for on my birthday.

Musician said:
I'm just bummed that I didn't get what I asked for on my birthday.
Click to expand...

But on the plus side you could make a whole tragic backstory for a character based on that experience.

But on the plus side you could make a whole tragic backstory for a character based on that experience.
Click to expand...

Assuming I haven't already? Who do you think I am?!

Musician said:
Assuming I haven't already? Who do you think I am?!
Click to expand...

Not the main protagonist, that's for certain. :p