-a futuristic espionage and mystery roleplay with elements of classic Cyberpunk lore and Risk: 2210 A.D. thrown in, all tailored around an original mystery storyline written by me.-

The Yutani-Kandel Corporate Monocity, near of Vladivostok, Russia. The year is 2237 and What's left of the world is trying build itself back up after years of consumption led to a vast socio-economic collapse and a period of martial law.
The World Government has had to rely on several megacorporations to survive. This has given them a veritable carte blanche to operate as they will, tearing apart once stable arcologies and small local governments. The Yutani-Kandel Biotechnology Firm has taken hold of most of the Asian continent, plastering their name on anything and everything.

More than 20 Million people clutter the streets of the YK Monocity in eastern Russia, all of them slave in some capacity to the black and gold skyscraper that towers over the city center.

Yutani-Kandel Biotechnology Firm:[/FONT][/B] A massive biotech and military enhancements manufacturer centered on the southeast coast of russia. Shipping lanes across the sea of japan gave them a stranglehold on the Asian tech markets back in the 2100s and they snowballed into a corporate giant from there. They run the central city, with private security policing the streets and quashing any form of rebellion in the area.

Infocomp: An investigation firm that offers information as a service, collected by private investigators hired out by the company.

Zetatech: A wetware manufacturer, dealing primarily in neural devices and circuits for psycholinking. 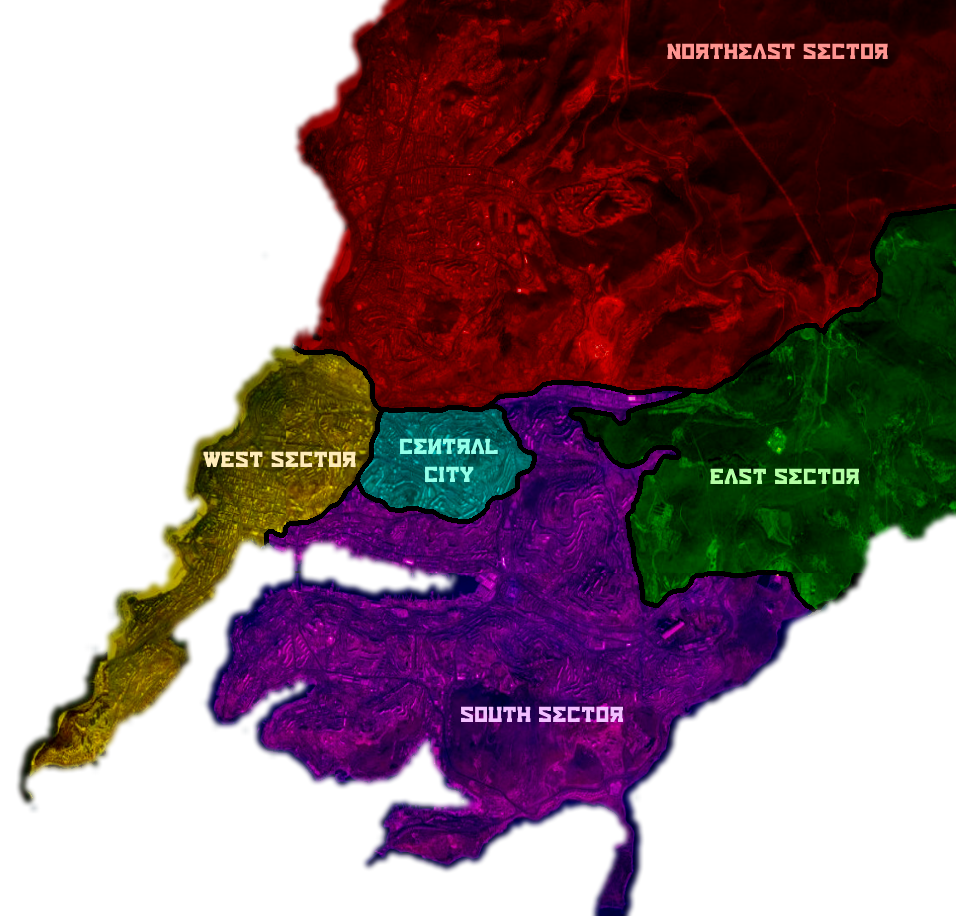 North East Sector: The trading and housing area of the city, home to the most popular trading camps, the massive North Gate, and the only land routes in or out of the city. The North Sector is also home to a large portion of the city's housing complexes.

West Sector: This area of the YKM is the designated entertainment district. Here you'll find drugs, hookers, and the ever-exciting, ever dangerous [NAME PENDING] Club.

South Sector: Here is where the port and seaside manufacturing districts are. You'll find shipyards, chemical and product plants, as well as most of the city's warehousing here.

East Sector: A largely farming and agriculture area, the east sector is home to the cities food production and solar fields, which power the electric grid of the outer sectors.

Central City: The business district of the city. This is where YKM central headquarters is located, among the towers and peaks of the hundreds of other nameless iconography-emblazoned office buildings.

The [NAME PENDING] Club: A popular nightclub located in the entertainment district. This is also where a large majority or the cities hits are played, or, in a business context, doled out to dangerous hit men/women.

Do the monster mash...

What ideas were you having for the characters?

Codebreaker said:
What ideas were you having for the characters?
Click to expand...

I dont really do premades, i just added that slot in there for player made characters. I figure ill whip out like a skeleton or something for folx to work around. That way people can be nice and original. UwU

Do the monster mash...

Taska Vilna said:
I dont really do premades, i just added that slot in there for player made characters. I figure ill whip out like a skeleton or something for folx to work around. That way people can be nice and original. UwU
Click to expand...

I see, I see, uwu Thanks yousa

Just a reminder, This is STILL OPEN! check us out!

Something you don't like? ILL CHANGE IT! I'm Eager for Approval!

The Mad Russian Commissar with Vodka

So what's the story itself about.

TheInsanityOfBobSemple said:
So what's the story itself about.
Click to expand...

Depends on what you mean by "story"

like the actual storyline, or at least, background upon witch the roleplaying would then be based?
-I'll be honest and say I genuinely haven't written it out yet. I have a vague cloud of ideas centering around a city-wide shortage or disappearances, a concerned old man, and a very big building. but beyond that, this interest check really hasn't garnered enough *interest* to warrant me going any further.

Ask me about my tourniquet fetish.

I'm interested. Last cyberpunk RP I participated in died off.

you people make me violent (inactive)

Hello! Id be interested. My character is a tvheaded robot would that fit in with the world? Some people are picky about that so I’m just wondering! I have art of his design if you’re curious

Fairbanks said:
Hello! Id be interested. My character is a tvheaded robot would that fit in with the world? Some people are picky about that so I’m just wondering! I have art of his design if you’re curious

As long as its not just a Canti cosplay i don't see why not :0.

Would you be willing to play into the [archaic] nature of TVs in regards to his design? I think thatd be a neat point for interaction. He's self aware yeah?

you people make me violent (inactive)