Most Call Me Jack

Alright folks, I'm not really good at devising well put together character sheets so what I need from you is an application in two parts.

Name
How old your character was when they died
Birthday
Faceclaim
General characteristics like Height, weight, and any additional features of the way your character looked in life
Occupation
Family
Friends
A biography that can be as brief or as detailed as you'd like it to be

Date of death
Clan
Changes to your appearance if you are a member Clan Nosferatu
Details abouts your embrace
Your sire and a little bit of information about them
How long you've been Kindred (between a couple of weeks and 6 months)
A brief history of your character's time as a Kindred.

Height: 6'1.5"
Weight: 190 lbs.
Occupation: Currently unemployed due his current circumstances, gets money by robbing people using his vampiric abilities (using Demention to convince them to hand over cash for example). His former job was data entry and he's skilled when it comes to handling information systems and records generally.
Family: He has an older sister, younger brother, father, and mother who all believe he's dead and who he can't contact due to the Masquerade. He's made his peace with this fact.
Friends: He had to cut contact with his few IRL friends, but has managed to stay in touch with a few of his online ones who didn't know his real identity or enough information to identify him.

Biography: Isaac was never going to amount to much. Born a middle child in an upper-middle class family his future was already written. Get a job, maybe get a spouse, and work until he hopefully had enough for retirement. This terrified him. He was sure there was more to life, but the fact that he didn't know what else scared him even more. This was made worse by his own sense of mediocrity, surely he'd fail once he no longer could rely on his parents, what hope was there for him? He managed to muddle through regardless, but that all changed June 1st, 2021.

Date of Death: June 1st, 2021
Clan: Malkavian
Details about your Embrace: All Isaac knows about his Embrace was that he was minding his own business in his apartment in New York and the next thing he knew he was waking up as a vampire in Denver, Colorado.
Your Sire and a little bit of information about them: Isaac knows nothing about his Sire other than the fact they'd already gotten their planned Embrace of him approved before it happened. He's not sure if he even wants to meet them but really wants to know if this was just something they did for fun or if he's part of an actual plan.
How long you've been Kindred: 3 months.
A brief history of your character's time as a Kindred: Isaac awoke as a Vampire in Denver, Colorado with the contact information for Alexis Fawkes taped to his chest. She got him situated and filled him in on how things work with the Kindred (including the use of his abilities) and then sent him off on his own. Since then he's drifted about, unsure of what he even wants to do with the centuries ahead of him. Right now he's living out of a nearly windowless condo owned by some rich guy who owns it but doesn't live there. Demention and Obfuscate are more than sufficient to convince any Humans that he has every right to be living there or nobody is there at all.
Most of all Isaac misses his ability to eat normal food as a Human. In life food was one of his major pleasures and undeath has robbed him of it. He's tried to fill the void with blood, but that only blunts the hunger. Isaac's constantly trying to find a way to fill that void, which could lead to trouble if he believes something can satiate his hunger.
Isaac's Embrace into the Malkavian Clan led him to fall into madness, more specifically hearing voices in his head only he can hear. They usually just offer him options for dealing with situations, but sometimes they tell him things he'd have no way of knowing. Speaking about those can go very well or horribly wrong. 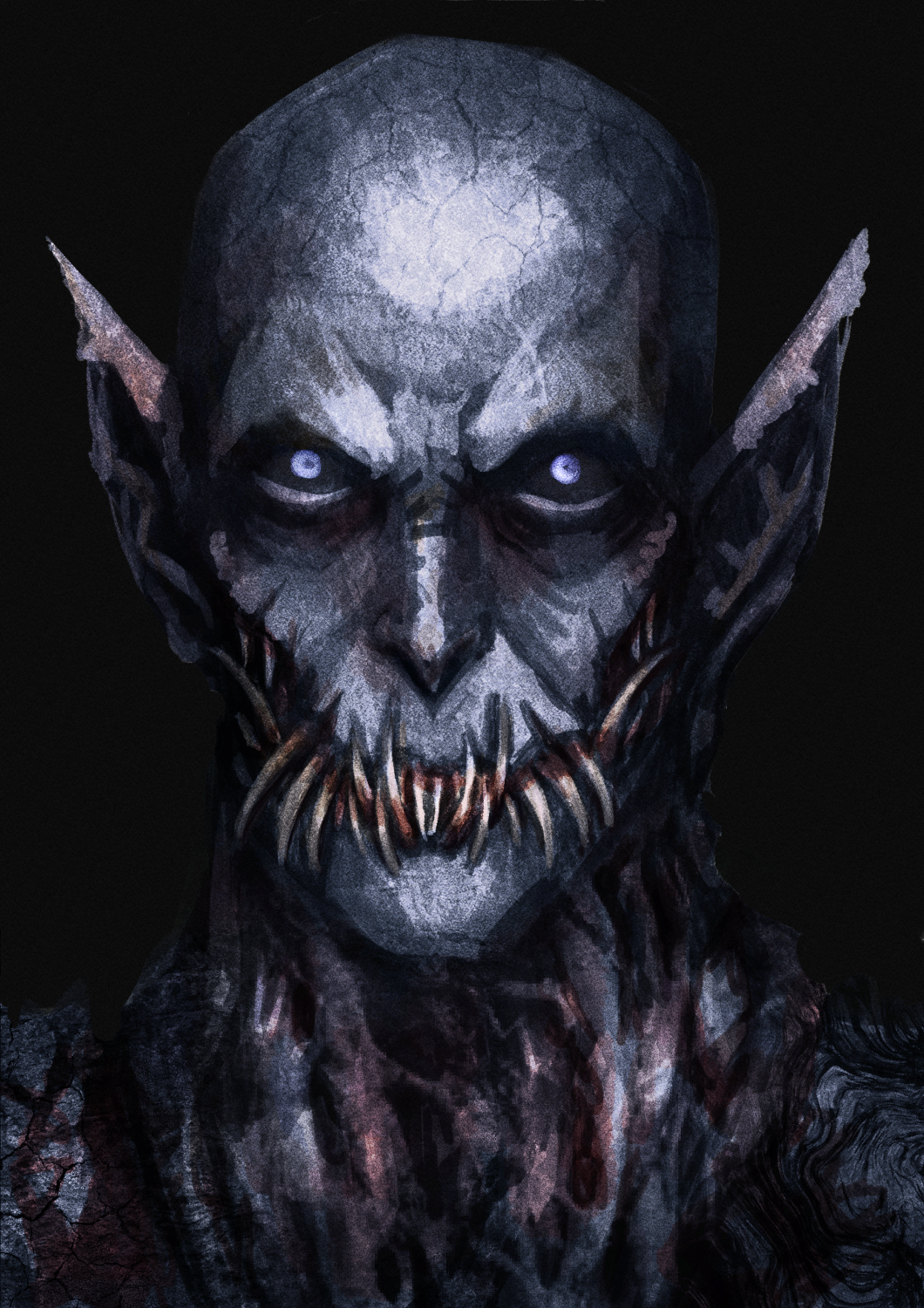 (Art by its-sixxers on tumblr)

Height: 6' 3'' ft - 1,91 m
Weight: 198 lbs - 90 kg
Appearance in life: Bling Bling was a tall, tan man. An assortment of tattoos covered most of the visible parts of his body, representing varied things - From roses to skulls and dollar signs. His head was shaved on the sides, and the remaining black tuft on the top was usually tied in a loose bun.

Occupation: Bling Bling was a well known hip hop artist / rapper and producer. He was forced to leave his career behind after the Embrace to avoid an imminent Masquerade breach. He currently works as an enforcer and spy for his warren. Luckily, you don't to pay rent in the sewers.
Family: He has a mother and a younger sister whom he has cut all contact with. Every once in a while he watches them while Obfuscated however, to ensure their continued well-being. Like all of the people he previously knew in life, they believe he died in a violent car crash.
Friends: He has cut contact with all of his previous job associates and lifetime friends.

Biography: Born in a poor suburb in Denver, William never considered himself the luckiest man. But with his ever present "change the world" mentality, paired with a love for everything music dragged him to the world of hip hop under the artistic name "Trigga", as a method to raise awareness to the living conditions of the poor and the corruption of governments worldwide. He started as an independent artist, but signed with a recording label as his popularity grew. And as it continued to grow, his original purpose was slowly lost amongst the fame and riches...

Date of Death: July 18th, 2021
Clan: Nosferatu
Appearance changes: The iconic Nosferatu embrace warped Bling Bling's appearance beyond recognition. The first change was the falling of his body hair, rendering him completely bald in the process. Then the real pain began - His skin greyed and tightened around his muscles, his ears stretched out to resemble ones of a bat and the sides of his cheeks ripped, giving room to the quickly overgrowing teeth and even longer fangs that sprouted as his new canines. His tattoos are faded, but still visible along his arms and neck.

Embrace details: Bling Bling is a product of spite. Initially targeted by a Toreador, whom had demonstrated interest for both his looks and music. Hearing this, a Nosferatu instead went for the catch, and reached him first. Not only to anger his Toreador rival (Which he sucessfully did) but to also, after watching Bling Bling while planning his attack, give a much needed dose of humbleness.

Sire and Information: Bling Bling came to know his sire by his kindred name, "Big Nose Sam", a nickname given to him due to the overbearing lump his nose became after his own embrace. Sam was a cryptographer in life, and now focuses on keeping the Nosferatu database safe from prying eyes and hands, especially under the tech ban instituted by the Camarilla (Although this has slowly changed under the current princedom).

Kindred Age: 1 month and 14 days
Brief history of your character's time as a Kindred: To say Bling Bling and Sam were in bad terms after the Embrace would be an understatement. Bling Bling had everything he wished for, and he blamed Sam for taking it all away. The notice that he was initially being targeted by the clan of "The most beautiful fuckers you've ever seen" did not do well to mend the relationship between the two. He has since had some time to cope however, and has reached out and accepted support from his fellow clan mates. Sam is still a rare choice of mentor but he has taught him the kindred lifestyle, and made a few attempts to teach Bling Bling overall tech skills. Bling Bling has shown little interest in these lessons, and much prefers to be the man in the field.
William in life, he was given the name "Bling Bling" due to the numerous gold chains and rings he had a habit of using, just as he did in life. He has since reduced the chains to a single, thin one however. He found that the metallic clattering doesn't exactly help in staying hidden with Obfuscate.
Last edited: Sep 2, 2021
You must log in or register to reply here.

One x One Mediae's Conundrum of Characters

Fandom Order of the Thestrals CS