Fantasy The Other Side | CS

what do i put here

Characters Participating In The Other Side Will Go Here.​

Name: Mercy Goodwill
Nickname: Mercy, #49, Prion
Age (at death): 26 (???)
Sex: female
Role: controller
Appearance: Mercy stands at 5'5. She poses droopy brown eyes and long black hair that she usually kept in a braid.
Abilities: genius prodigy in almost all field of study
Superpower: Neurodomination (Mercy can create liquid that allows her to control someone else for a period of time. After the effect wears off that person would develop immunity against the liquid's effect.)

Homeworld: Miscarta, used to be a regular cyberpunk-ish world with quite advanced tech. Then they discovered a method to forcefully develop a human mind to attain powers beyond what a normal human can achieve. These superpowered people are called espers. Now the big countries are in a race to develop their own super army before their rival does.

History
As far as she can remember, Mercy had always been living inside the facility lab along with the other kids from Project Esper. In that place they're trained, educated and conditioned to become the best espers on the world and contribute well for the fatherland. Even among the chosen childrens Mercy was a prodigy, but she was never good at getting along with the other kids.

Upon graduation she undergo the mind-awakening procedure and manifested her power for the first time. It's not the flashiest kind of esper power, but she was immediately recruited into the intelligent division. Tasked to gain information and execute covert missions. With cutting edge equipments and elite teams deployed to take advantage of her power, she was on her way to climb the ranks really fast.

Then suddenly she just stopped caring. She discovered that she was a baby born from a tube, she and the other kids from the project had never been an orphan like they had been told to. They're mass-produced human made by the goverment and their life had been determined by someone they might never met. She felts like her mind and heart had been paralyzed by the reveal and didn't want anything to do with all of that. She refused to work and spent all her time taking aimless walk across the city and blankly stare at the horizon. Unfortunately for her, the goverment couldn't let an esper with her kind of power runs freely so they sent an executor.

Personality
Mercy is a stoic unmotivated woman with flat expression displayed on her face all the time. She can be rather sharp with her words (which she claimed as her being honest) but overall she's an obedient person. She lacks the ability to perceive her own emotion well, and this make her prone to fall into periodic existential crisis. 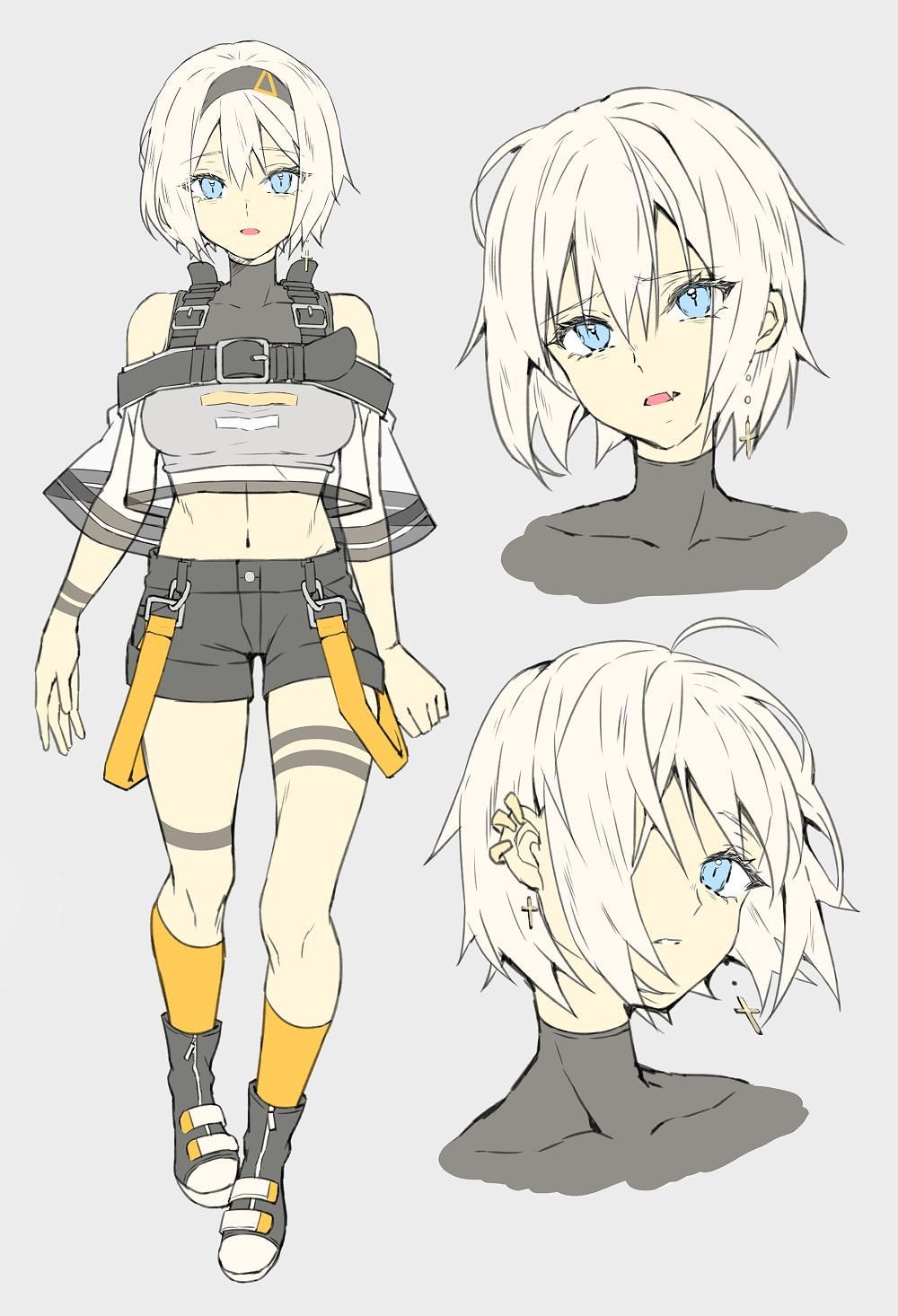 Shisari Tesaki lived on the planet Oren Delta 13 for her whole life. The planet was simply one big industrialised hub for trade and factory production. The smell of burning rubber and rotting corpses was overwhelming everywhere you went. It was humid and the air was heavy with death. It was hard to survive on a planet like this, especially when resources were limited and food was scarce. Shisari spent her life scavenging for scraps with her younger brother. Multiple times, they had run into the Xuvvuns, which were the factory wardens. They were great mechanical beasts who managed the Orinthean workers, beating them into check. One run-in left Shisari without her left arm, so she had to substitute her missing arm with a mechanic replacement. Another time, one of the Xuvvuns killed her brother. It left her devastated. The Xuvvuns were mostly mechanical with only a living brain to power them. A Xuvvun brain was the prize of any market, and because of its value, there was not a lot that would stop a person from killing another to gain one. As Shisari had killed the Xuvvun which had murdered her brother, she took the brain, which made her a target. The Orintheans had a belief in reincarnation where they would take the skills of their killer into the next life, their soul would be bound to that skill. This was how Shisari died. While she was transporting the brain to her buyer, a sharpshooter sniped her from a roof and killed her for the valuable package. This was how she gained her skill as a markswoman.

In life, Shisari was best at looking at different options for troubling situations. She was never the best or brightest when it came to planning, and she would always jump in with a determined head on her shoulders. After she was killed, Shisari gained a calm and confident demeanour as she took on the personification of her killer. She was straightforward and focused, her eyes always set on the prize. Her aim is always dead on and her throwing skill is impeccable.

Standing at 5’7”, Shisari has a slight frame and is very easy to underestimate, which should you do, will be your biggest mistake. She makes up for her size with a deadly glare and sharp fangs, characteristic of an Orinthean. Her left arm is mechanised and welded into her skin, merging with her nervous system for control, yet it looks just like her normal arm. Shisari has wild chin length white-blonde hair, cold blue eyes, and pale skin. She has multiple piercings on each ear and holds her head high with a proud pair of large angel wings tattooed on her back. She typically wears the colours complimentary to Oren Delta 13, white, grey and orange. Her voice is scratchy, almost sounding like it was cluttered by broken glass and rocks, which was from the damage that her planet’s pollution did to her. She wears a simple headband, which was given to her by her brother as a reminder that he loved her, and she still wears it to this day.​

Appearance: Rowena had choppy platinum-blonde hair, falling about two inches past her shoulders. She was a very small girl, but very toned. She knew how to take care of herself and kept herself strong; however, hardly being over 5'2" made it hard for people to take her seriously. She usually always wore a mask, covering the bottom half of her face and kept dainty little bats in her hair. She always liked to decorate her hair either with bats, birds, or flowers; she thought it was just cute. She was normally wearing black from head to toe, never wearing any color. And you couldn't forget her chunky combat boots. Her eyes used to be a bright light blue, standing out over anything else she wore.

Personality: Ro was definitely a special type of person that only a few people could handle. She didn't care about who she hurt, what she said unless she loved you. Then, she would be the sunshine in your life, always protecting you. She had a sort of crazed behavior to her; very spontaneous and erratic. She wasn't very go-with-the-flow, always had to prove her point, and was always ready to put up a fight; an attitude. Some people would use the word bratty to describe her. But once you gained her trust, she was the most loyal person to have by your side. She didn't open up much, or too many, but to the people she did, she would have died for them.

However, Rowena just needed some serious therapy. Someone to help her regulate her emotions and her behaviors. She had been through a lot growing up and didn't have someone to be a decent role model for her. But would Ro ever let herself be that vulnerable and talk to a therapist? Hell no.

Background/World: Rowena lived in a universe where no one had a soul. Almost everyone had no emotions anymore and were twisted versions of humans. Everyone lived in small pods across the world that were placed in giant skyscrapers. The world's currency was the human psyche; you paid with your mentality. All the rich and wealthy were mentally insane unless they used someone else's mind to buy their things, and all the poor were morally good people. However, they couldn't afford anything. Usually living on endless streets, being used in a black market to sell their emotions, or dead. Sadly, Rowena never made it out of the black market before selling almost all of her sanity. There weren't many people who were sane anymore, every being devoted to The Program that developed the Transfer Machine. Changing the ways of Society forever.

Rowena grew up in a very poor family; never seeing her parents. They worked day-in-and-day-out, but could hardly scrape by and provide for Ro. Little did Rowena know, they weren't just going to their jobs. They had started selling their sanity to get extra funds. They had never told Ro about it, never showed it around her. But it didn't take long for her to notice and for them to stop coming back. Slowly, Ro had to watch her parents growing up, fall out of love, and eventually hate each other, disappearing every night until they didn't come back. After that day, Rowena promised herself she would go after the black market: The Program. However, it was hard to continue her goal when she had already lost her mind. It would be the death of her; literally.

How the Transfer Machine worked was, that the people would be plugged into a helmet. You could find these at the banks scattered around the cities. Many cords connected the helmet to the Main Computer and each emotion had a different price. Wanted to pay for something small, it would take away lust. Wanted pay for something expensive, it would take away Happiness. You could also transfer the funds onto a card instead of instantly paying for something. The banks around were funded by and called The Programs.​
Abilities: Will be revealed during the RP.
Last edited: May 23, 2022
You must log in or register to reply here.

Fantasy The Flight of the Falcon (CS)

Realistic or Modern The Spirits (cs)