Fandom Set sail from south blue, a one piece remix (starts with three and welcomes more)

Our story begins in the city of Soarsea, a trading hub on a island within the south blue. It doesn't matter what you look for because in Soarsea someone has it. Goods from all over the south blue (and sometimes even the other blue seas and beyond) make their way to and from this beautiful seaside city. But like most places in this world, Soarside has a cruel underbelly.
A young man Lalo-Dee grew up despising his hometown for many reasons. The weakness of the townsfolk, the petty nature of civilians and their class systems, the navy so easily paid off and crooked, and of course the thug who ruled over Soarsea with a iron grip...

All of these problems were set in stone before Lalo was born, a Pirate captain has had this island under his thumb for the last twenty years. It was Lalo-Dee who vowed to end him. If he couldn't take down the man who dictates his home, his people, the lives of the people and himself... how could he look into the distance claiming "I'll see it all"
If he couldn't even see past the colours of Capain Gordie "Ape-man" Patrick.
Lalo's parents had their lives ended by ape-man's crew. Everyone including Lalo saw getting kicked about, threatened and being outnumbered as a daily part of life.

"it won't last forever, I'm fighting back, making plans..."
Lalo often spoke such words to the street urchins who grew up like him, though this time there was weight behind it.
Captain "Ape-man" Patrick recently invited many pirate captains to a parlay at Soarsea. The rumours being he had prizes and treasure for those willing to cooperate.
The ape-man killed each captain who opposed him,
His forces seize each pirate ship while their captains were at the meeting,
Each pirate left alive was given a choice...
"join my fleet! Or crumble and die at my feet! Pwhahahahahahahahahahah"

It's been three days since captain Patrick's cunning ambush. However all is not well, the captains newest treasure has been stolen! While his men rampage through the city...
The civilians and pirates who hadn't joined the ape mans forces soon found themselves before a young man claiming to be the infamous thief the pirates are after...
"I know your here because of unfortunate reasons, but as a unfortunate soul myself I see you all as lucky. You all here, each one of you... has a chance to set things right!
I've lived my whole life under ole Gordies rule. So to have a number of men and women seething with hatred at the man who murdered your family, killed your captain, ruined your livelihood!!... I suddenly feel blessed. Cause I Lalo-Dee have a plan to make the Ape man pay. We'll exact painful retribution that we can all call justice. Get payment for the misfortune, Avenge your family and friends deathes! Follow me to revenge so we can soar freely towards our dreams!"
======================
One piece Rp, but instead of following the canon I had a plan to shake up it up somewhat and we can all make entirely new characters for rival pirates and navy officials.

I figure depending on how many people join would determine how many characters one would play. This rp is somewhat of a slow burn. The starting island of Soarsea is in the middle of South blue and from this arc the newly formed pirates would travel to a few different islands before hitting reverse mountain and the grand line.

Players would be encouraged to pitch ideas for character arcs, similar to the beginning of one piece.
(Instead of forming a crew along the way, more each crew member originating from the south blue getting a arc for closure. A island with a asshole who made character's life shit for example)

The first arc being the captain Lalo-Dee forming a crew from the remnants of other pirates and civilians with a reason to hate the first villian,
Then a mixture of player scenarios and my own all the way along until finding the one piece. As it's south blue karate island would be a main arc as well aha
===========================================
A similar idea for a starting point that I had was that the first island of the grand line is subject to a battle in which one big ass crew decimates a number of smaller ships and crews, the survivors of this battle having lost their ship and crew have to band together to fix a ship from the wrecks and hunt after the ones who killed erryone

As far as characters and their abilities I'd rather each player leave room for growth, can't start off as a skywalking haki using badass son of a gun...
But techniques and devil fruits are allowed
(Though somewhat limited to begin with)

Post requirements would be two paragraphs or more twice a week

a few Ideas for rival pirates. I imagine them to lead or be apart of crews that originate from the south blue

A skilled thief and trickster who has eaten the Card card fruit, not a tremendous fruit in terms of attack power but he is able to throw razor sharp cards or trap things and even people inside cards he creates.
Has once avoided a high ranked navy officer by transforming himself into a deck of cards.

Karate master who ate a zoan fruit or... a tiger mink who traveled to the south blue to learn martial arts at karate island.

Guy with a gun/cannon for a hand/arm, Pretty self explanatory

Sure,illness throw my hat in

For the start anyway, I'm happy for three characters to gain a fruit in the first post.
My plan being captain gordie has two fruits hidden away and a third fruit recently came due to the previous user dying on soarsea. Said fruit respawns in the ape captains treasure room.

More rival pirates an such

Maximo Zaar, half giant whose eaten The zoan fruit of a bull.

Ohm Ford, a Young man with the logia of electricity, (won't be as OP as "god" though) 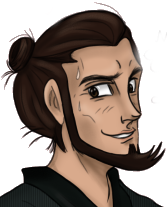 Skills -
Zakeuss is a decent musician, playing a Steel Guitar with amazing skill.

Zakeuss is a surprising good fisherman, having be the son of a fisherman himself. Give him the right bait, and he's certain to make the catch.

Being of the Longleg Tribe, Zakeuss main form of combat is the use of his extended legs. He mixes it with un orthodox moves that resemble break-dancing or ballet.

Personality - Zakkeus is a rather kind and easy-going fellow. He's often curious and open to learn new things as he was never truly educated about the inner workings of world. He has a low opinion of himself due to his upbringing and his unfortunate circumstance that caused him to loose his legs, and therefore, his pride. But even still, he takes pride in being a hardworker if nothing else.

History - Zakeuss was born to a low-class family. His father was handyman who often took up odd jobs and his mother was a ivory craftswoman. Zakeuss was a delinquent. He never went to school and usually hung about around town or went with his dad to help him with his jobs. His mother tried homeschooling Zakeuss which was difficult as both she and her father were both concnered with making income that they couldn't commit fully. By the time he reached adolescence, a Civil War broke out between the Longlegs and the Longarms, which resulted in him getting captured by the latter and tortured for years until his eventual escape. In which, he had to replace both of his mutilated legs with peglegs. Since then, he's been sailing across the seas on a makeshift raft.

Role: Muscian/Helping Hand
Example Post - "My o' My, ain'it a gud day to be a-live." Zakeuss said to himself as he was leaned back, sitting on his raft with one of his legs crossed over another and a wooden fishing pole in his lap as the hook was already cast into the blue waters. His fishing cap provided him with decent shade and he was huffing and puffing with his pa's old pipe. "Yes'ser, 'tis a nice o' day t'day. De sees 'er calm y'see. De Sun is werm, No clowds as fer as de aye can see. Not'n but me, ma' trust-eh raf', and ma' luck-eh pole. Yulp, yulp, ylup. Cudn't be a fine'r day d'an dis! Mhmm! Das fer sure."
You must log in or register to reply here.

Fandom Waves of Change, A One Piece RP

Fantasy To the end of the universe! (Mix borderlands with one piece)

Fandom One piece: king of the bounty hunters!

Fantasy Who shall rule? :: A medieval fantasy which needs players