I am looking to roleplay a royal Arranged Marriage RP. I intend to play the Prince or King of one kingdom. You would play the part of a Princess or Queen of another.

Before I forget, the age range I am looking for should be in the mid young adult range, say 22-25? The RP is set in the year 2016. As your character would have been born in about 1992, she should be 24 at the start of the RP. (The old King wouldn't have known about her when he left. Only learning of her years later.)

For the female role:
She is a character with a background along the lines of Princess Diaries, but an original character. Feel free to have a very different personality. She would be the sole heir or present ruler of Latveria (Estonia, Latvia and Lithuania under a single sovereign), She was the offspring of the old King and his first wife. The woman was a commoner from the US, England, or Australia. The marriage was later annulled when the King was called to return to Latveria after the end of the Cold War (1991) and the end of the USSR. He remarried. But your character is the only direct blood relative. She grew up with her mother as a commoner and was unaware of her father’s true nature. He was just some rich man her mother knew. She has only recently been pulled into her royal life. (Up to you how long. Maybe the time span of Princess Diaries 1 and 2 or in between?)

Your character is the last survivor of the Romanov Dynasty. In this alternate timeline the family did not die out and instead ended up settling in Latvia. Over time it increased its domain to include Estonia and Lithuania. It suffered greatly under the oppressive thumb of the USSR. Latveria is small and threatened militarily, but it has some strengths - such as economic potential. It is an absolute monarchy.

As this will be a fictional kingdom you will have dramatic license to develop the government of your kingdom, its politics, subjects, etc. 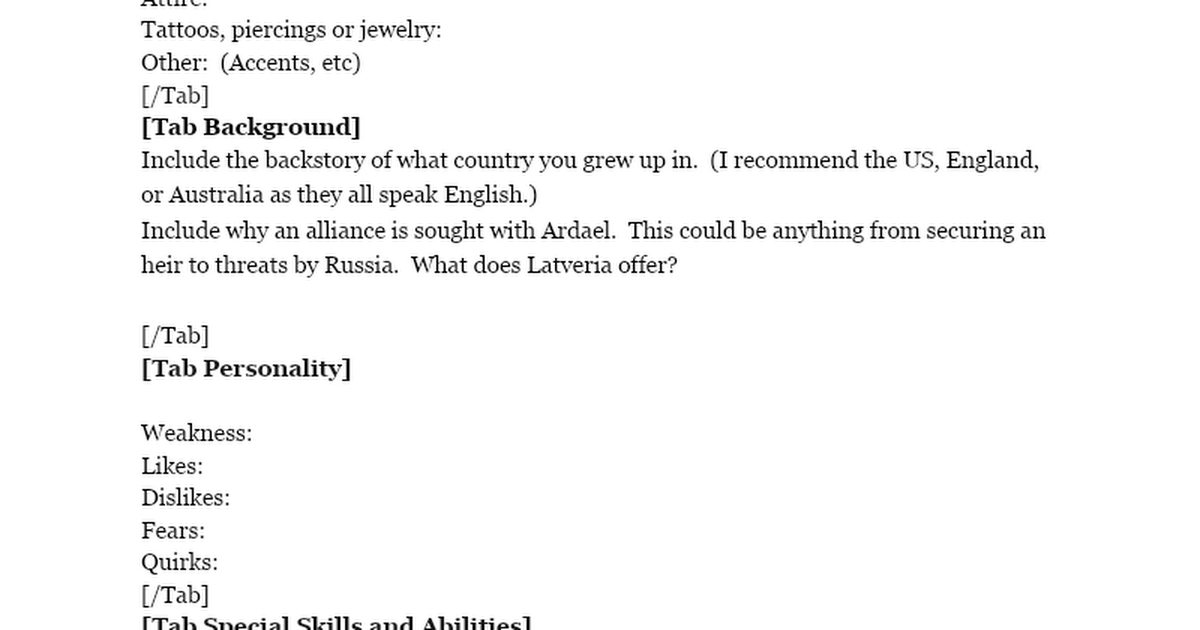 Image Name Age: Date of Birth: [Tabs] [Tab Appearance] Height: Scars: Attire: Tattoos, piercings or jewelry: Other: (Accents, etc) [/Tab] [Tab Background] Include the backstory of what country you grew up in. (I recommend the US, England, or Australia as they all speak English.) Incl...

For the male role:
I am going to have a character with a similar background. He will be the new King of Ardael, a fictional version of Transylvania. He will have grown up in America and come into power in much the same way as your character.

Ardeal
Where is Ardeal? Ardeal is the proper name of Transylvania. Transylvania is what the Ottoman Empire called the region when it was under their control. In THIS setting Ardeal will consist of Romania, Moldava, and the piece of Ukraine on the west bank of the Dniester River all the way to Zatoka on the Black Sea.

Ardeal has a system of government very similar to Jordan. It is a unitary state under a constitutional monarchy. Jordan's constitution is the legal framework that governs the monarch, government, bicameral legislature and judiciary. The monarch retains wide executive and legislative powers from the government and parliament. The monarch exercises his powers through the government that he appoints for a four-year term, which is responsible before the parliament that is made up of two chambers: the Senate and the House of Representatives. The judiciary is independent according to the constitution. Click here for more. Most of the variations are due to a difference in culture, such as not being Islamic.

Plot
This is still TBD as we still have to decide whether either or both of us are rulers yet.

Rules
Well obviously RPN rules apply.
Please be 18+.
Posts should be 3rd person past tense, with a length around 400-600 words - or better.
Quality is better than quantity.
The RP will be in PMs. One thread for IC; one for OOC.
Communicate.