Fantasy Return of the Druids [CS]

Make your own character sheet here! Feel free to use your own format.​

"Don't ask me why I'm the only guy allowed to live here. I didn't make the rules; the that would have been my gran, Rose. I'm just here to look after the Witches' Cottage. Treat me like your butler, and I'll make your time here very, very boring."

Emblem: Feathered Green Witch
Favorite Area of Study: Enchanted Cookery
Favorite Food: Savory Vegetable Pies
Animal Familiar: Raven
Personality Type: Aloof
Hobbies: When all his chores have been finished, he appears to be a frequent shopper in town...
Sexuality: He looks you dead in the eyes and says, "That's irrelevant to my time here. I'm the housekeeper, remember?"
Notes: He's of Baymorda Stoneflick and grandchild of Rose Stoneflick. As far as you know, he has lived in these parts all his life. It's his duty to maintain the Witches' Cottage and provide meals for the guests. You often find him cleaning up messes in the kitchen or kneading dough. There's something youthful about his face, but for some reason, he tends to dress in overly refined clothes...

"I'm the one who brought you here, remember? That's the only freebie you're getting out of me, I'm afraid. If you want to know the secrets of this place, I'll never tell. You'll have to find out on your own."

Emblem: Feathered Green Witch
Favorite Area of Study: Herbalism
Favorite Food: Coffee Cake
Animal Familiar: White Cat
Personality Type: Big Sister
Hobbies: As she looks at you, her face lights up. "Well, witchsurfing of course. Don't tell me you haven't heard of it before!"
Sexuality: "I think I would like to meet an handsome man someday... But, who am I to decide the love of my fate?"
Notes: Under the guise of a stagecoach driver for "Victoria's School for Wayward Girls," Baymorda brought you here. Unlike her brother Gwydion Stoneflick, Baymorda has spent some part of her life in normal human society. She even has a passport! When you look at her, you have a difficult time pinning her age. Judging by her high cheek-bones and sophisticated red lip, you've been given impression that she's in her mid to late twenties. You often find her pottering in the garden and pruning the hedges surrounding the Witches' Cottage. Perhaps that's her job here?

I love the video clip as well.​

Sexuality: It's not really something she's explored. In her eyes, she'll know when she's found a person.

Familiar: An African Rain Frog! His name is Mistral

Hobbies: Addie loves walking out in the woods or wilds, looking for new plants and ingredients to draw or use as ingredients in her potions. She also just likes to draw in general, she loves to go to a populated area and sketch the people around her.

Favorite Food: Anything with honey, but especially black tea.

Notes:
~She's entirely new to the island. She was sent away as a wayward girl, not in the means of rebellion, but rather in the means of disinterest in polite society. She told her parents she wanted to live by herself, in a cottage or cabin in the woods, and that was enough to set them on a warpath.
~She discovered the small magic within her pretty much by accident when she was younger. You remember being a little girl and making "potions" with leaves in your yard? Yeah, think that. She didn't think much of it though.
~Right now all she wants from life is time to do the things she actually enjoys (and possibly to meet others like her).

Living Arrangements: Rents a small, one bedroom apartment in Castmere but spends most of his time working as a full time baker at Cafe Veronica.

Magic: None that he knows of, but he does enjoy putting out burnt food in the alley behind the Cafe in case any magical creatures are scrounging.

Hobbies: Work tends to keep him pretty busy, but he enjoys it. At home he likes to try out new recipes when he can afford the ingredients, and he keeps a well-filled journal.

Notes:
~Atticus has been working at his job for about two years now. He doesn't exactly make bank, but he's doing what he loves.
~He never wants to leave Castmere, it's the best place he's ever lived and it would kill him to go anywhere without that sort of special magic
~He loves when the cottage witches come into the shop, but he's deeply curious about what they learn back at their cottage.​
Last edited: Oct 16, 2021

as long as i'm here, you're invincible! 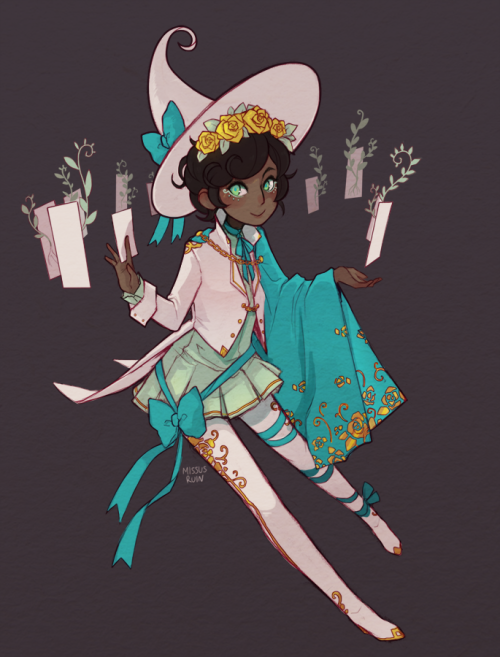 gender : nonbinary, prefers they/them but will accept any pronouns without much mind

sexuality : has no gender preference

notes : runs a small stall where they'll tell fortunes, usually either through tarot cards or tea leaves, specifically those pertaining to love. often buys odd things at the shops for seemingly no reason. will do anything for a price--and takes payment in sweets.

Oooh, how exciting! All accepted! 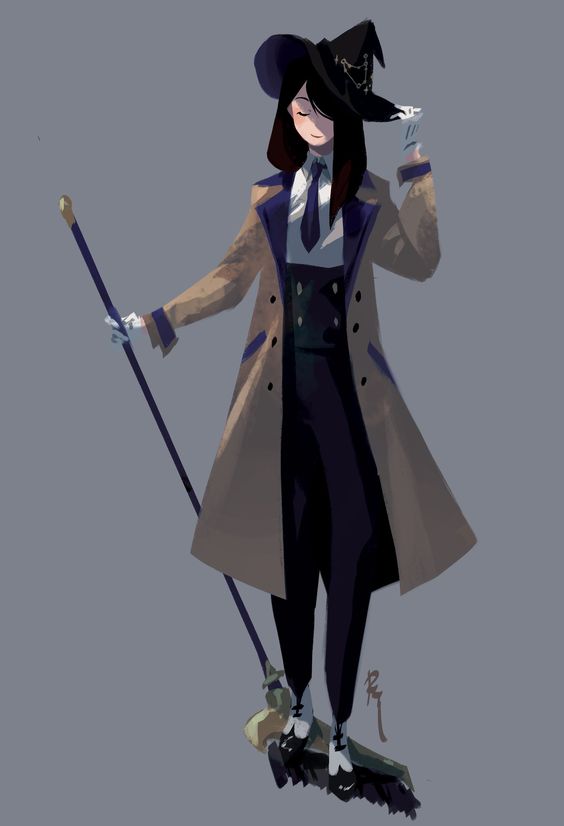 "Hm, perhaps if I tried this... ah... Gwydion is going to get angry... I wonder if he's going to make me clean up again. What do you think I should do, Ein?"

Hobbies: "Have you tried going to the Wilds yet? It's fun to go out and explore. Danger? As long as I have Ein, I should be fine." She pauses as the snake hisses to her ear. "Oh... would you like to come?"

Sexuality: "It's not within the realms of my interest to be married. Why do you think I was sent here?"

Notes:
Wren had been studying at the cottage for around five years after she had adamantly refused to be married off to multiple eligible bachelors. She hadn't heard from her parents ever since but she finds that she doesn't mind the silence.
Ein had been one of the first animals she had ever spoken to out in the Wilds. Though initially thought to be dangerous, he had proved to be an able familiar.
Wren accepts requests to go out to the Wilds in search of something or to generally be a bodyguard and guide just in case some stumble upon something dangerous.
​

Hahaha, YES! >:+) Gwydion is going to make *her scrub the walls like no tomorrow. Welcome.

Mavies Goldheart
"...Hello? M-my name is Mavies P. Goldheart. I-I am 20 years old, female..." She meekly looked at you in the eyes, cheeks flushing as red as ripe apples. "Am... Am I getting kidnapped?" 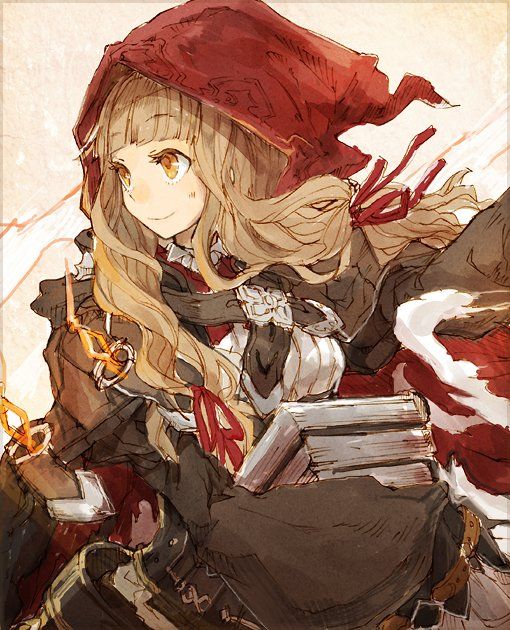 Emblem: Gloved Red Witch
Specialization: Destruction
Favorite food: Jellied eels with dry bread
Animal familiar: A whale that can shift to a pocket-size and float around freely without the need for water

Notes:
She's a newbie and is still pretty much convinced she's been kidnapped.
The area where she grew up neither knew about the existence of magic nor believed in it. Suffice to say, she's still in denial and will probably yell for help at the slightest hint of magic.
​

Yes, you ARE getting kidnapped. >:+)
Welcome! Love to see the destruction magic happening here

BASICS
Name
René "That Damned Cat" Villeneuve
Nicknames
"You may call me Your Grace or perhaps Your Lordship if would like some variety."
Race
"Are you blind? I'm a cat. What breed, you say? ... I do not fall into such low-level categories."
Age
"In cat years, I could be your grandfather."
Sexuality
"Whyever would you ask about this? It is clear that I am a cat. A very fine cat indeed, but a cat nonetheless. Are you a degenerate?"
DETAILS
Personality
"If you could not already tell, I can only say: figure it out yourself, I can't be bothered with stupid children."
Favourite Area of Study
"While I may not be a student, I certainly have an opinion of the teachers here. It speaks of backwards, prejudiced ways to forbid dark magic. One must know the field to avoid it, after all. ... Ah, you said favourite area of study. Forget what I said then. If I had to say, it would be the elemental disciplines. As that one poet once said, ending the world by either fire or ice would be valid, probable methods. Though I certainly wouldn't do such a thing."
Favourite Food
"There are a great many things that are delicious in this world — one of the few aspects of mankind that I find quite pleasing. Greatest of all though, is the all natural delicacy known as king salmon. A truly regal fish fit for a regal cat."
Hobbies
"The foremost art of catkind — hunting. Not for vermin, that is a plebeian habit belonging to cats of concerning intelligence, but for... knowledge. Yes, knowledge. Nothing nefarious, I assure you. Other than that, I believe I find overseeing my human minions, ahem, the students to be a fulfilling task."
Notes
"Are you sure you would like to hear the retelling of my noble history? Your kind doesn't seem the sort to comprehend a grand tale like my own."
Last edited: Oct 16, 2021

and we entertain this idea of world dominion pfffttt

Gwydion is leaving out a bowl of milksy tonight

as long as i'm here, you're invincible! 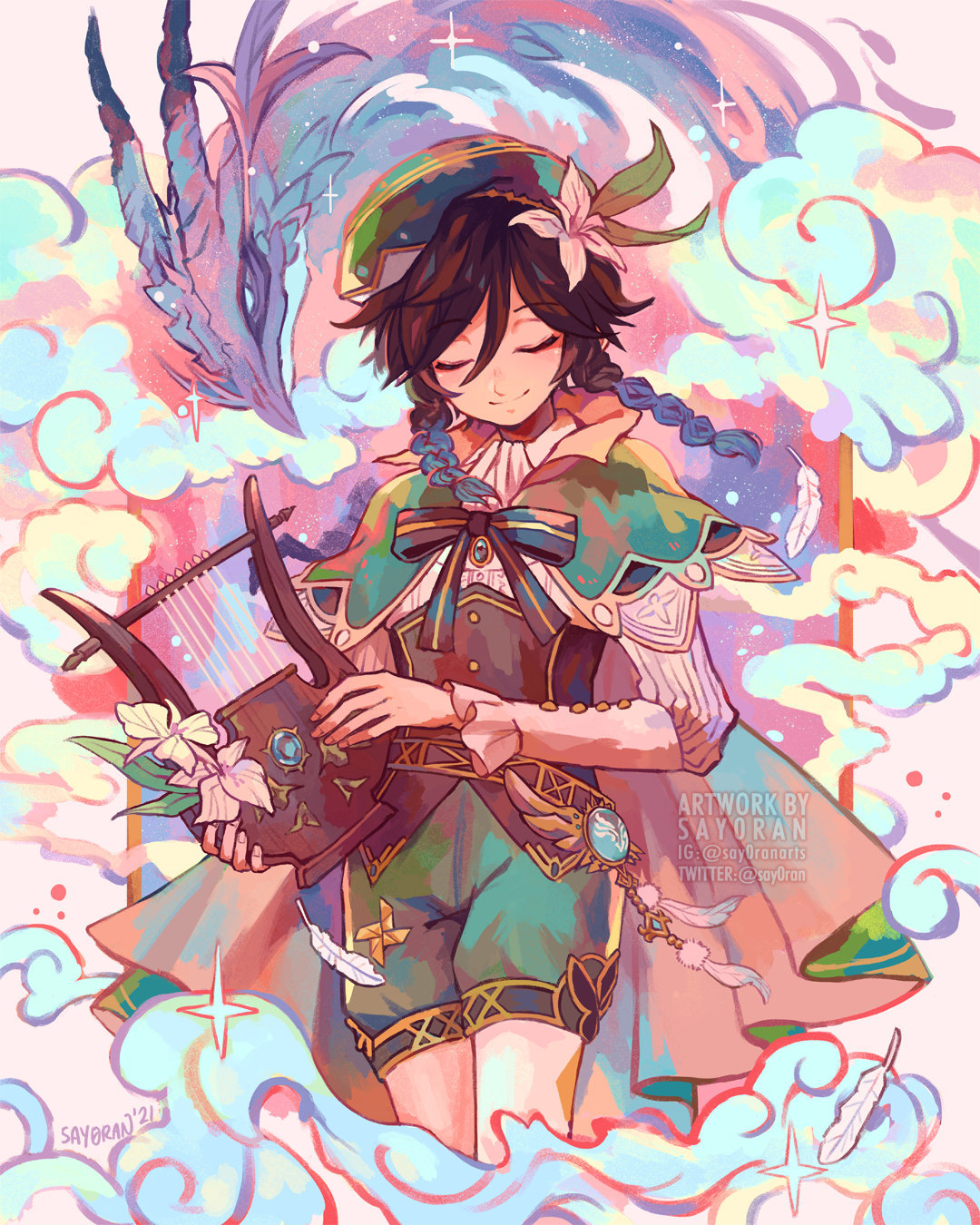 sexuality : has only shown attraction to other males in the past

notes : plays most nights at the cafe, enchanting others with his music. will play for just about anyone who will listen. treats himself like a local celebrity.

personality: loves nature and plans to be a nuture witch when she is older, as well as a botanist. she is kinda shy however she does love to make new friends.

reason for her wings: she acadently hexed herself with the wings, she now has to live with two big appendages on her back that she doesn't even know how to use. 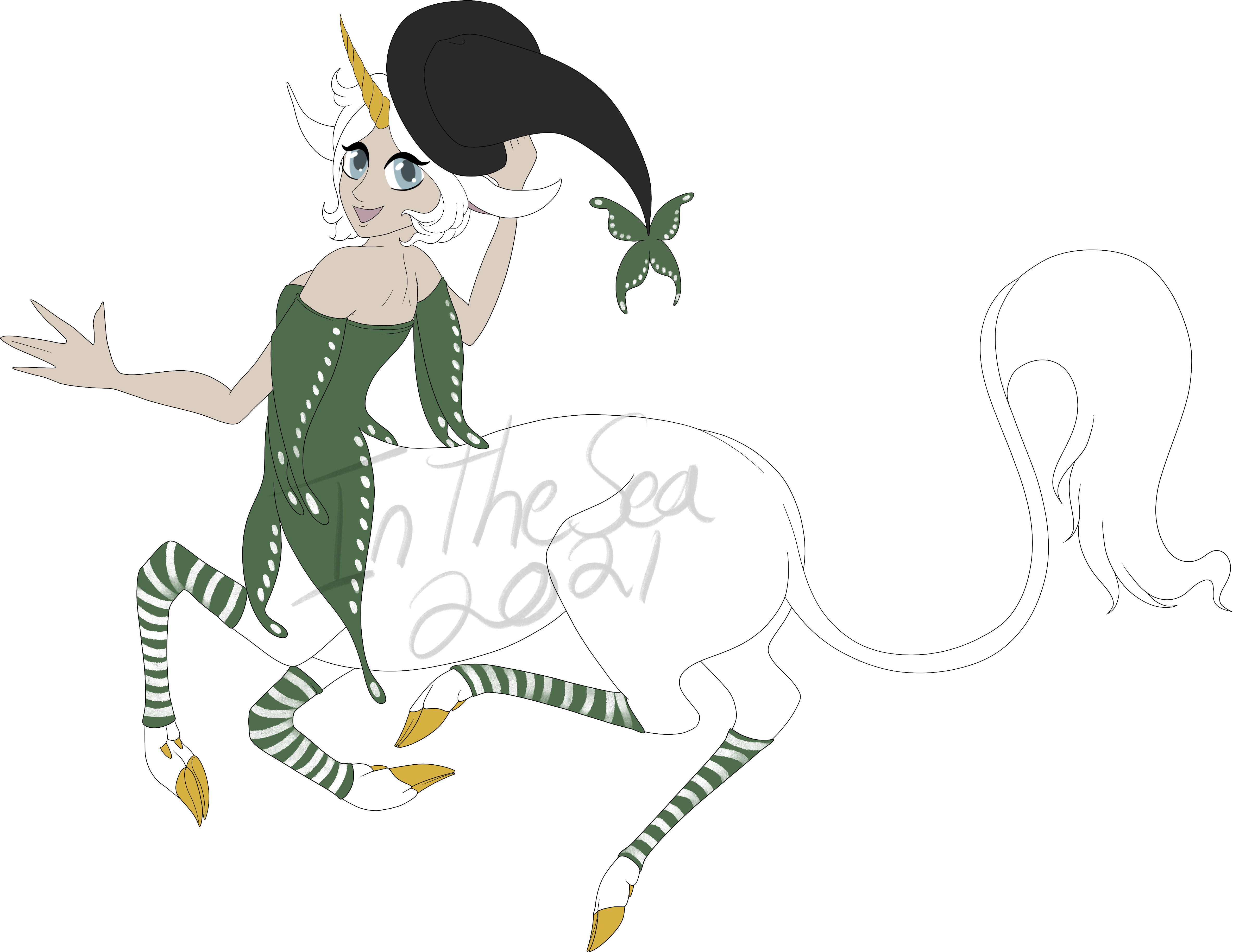 Favorite Food: Tea cakes and sandwiches, and don't forget the tea and honey!

Hobbies: Gardening; she has quite the green thumb!

Sexuality: Far too oblivious for such things; she loves everyone, really.

Notes: After being blessed by a herd of unicorns after they had rescued a foal from a terrible accident, Flora's family witnessed the birth of a daughter who shared similarities with the creature they had saved. Because of this blessing, she possesses a connection almost unheard of with her fellow mystical creatures. Although she has lived her whole life in a land of magic, it is only recently her own powers have manifested. She prefers the freedom of the outdoors to the strange rooms of the Academy, so it's not uncommon to see her dozing beneath a nearby tree with a book in her hands and her butterfly, Flutter, on her shoulder.

Many people will beg for rides from her. I love your art as well of Flora as well!​

I literally want to marry her. Bring her innn.

​
You must log in or register to reply here.

Realistic or Modern A Magical CS from Outer Space [CLOSED]

Fantasy land of the free // cs