Here is the character sheet for my new RP, Pokemon Mystery Dungeon: Shadows of Mu

RULES ON CHARACTER CREATION:
1. As the Game Master, I will be controlling all important NPCs (Pheromosa, Zamara, Diancie, etc.). However, other players can control non-boss enemies if they want to.
2. The following Pokemon are not allowed:
- All Legendary and Mythical Pokemon. Some will appear in the RP as NPCs or bosses. Phione is an exception due to its disputed status.
- All Ultra Beasts.
- All Baby Pokemon, with the exceptions of Munchlax, Riolu, and Mantyke.
- Event-only forms of regular Pokemon, like Ash Greninja and Eternal Flower Floette.
- Caterpie, Metapod, Weedle, Kakuna, Magikarp, Ditto, Unown, Wobbuffet, Smeargle, Wurmple, Silcoon, Cascoon, Kecleon, Beldum, Kricketot, Burmy, Tynamo, Scatterbug, Spewpa, Wishiwashi, Pyukumuku, Snom
3. Due to the popularity of Eeveelutions, I will only allow two Eeveelutions. (Eevee will be included.)
4. You are limited to four moves. If you want to learn a new move, you must forget one of your old moves.
5. Female-only Pokemon can only be female, and male-only Pokemon can only be male. No male Chansey, please.
6. Genderless Pokemon can use masculine, feminine, or gender-neutral pronouns.
7. If your Pokemon has two possible abilities, it will have both. (Hidden Abilities are not allowed.)
8. Limit of one held item per character.
9. At the start, players can only have one character, but later on I'll let players have more characters.
10. Due to their popularity, I'm limiting the number of Shiny Pokemon to two.
11. Due to their strength, I'm limiting the number of fully evolved pseudo-legendaries to one. Don't worry, I won't take the spot!
12. Have fun!

Name: Orville
Species: Magnezone
Type: Electric/Steel
Gender: Genderless (uses masculine pronouns)
Abilities: Magnet Pull, Sturdy
Attacks: Spark, Iron Head, Thunderbolt, Electric Terrain
Held item: Magnet
Personality: is a kind, friendly, and highly optimistic, and surprisingly childish for an adult. However, he can be a little vain at times.
Likes: exploring, electricity, magnets, clothes, cookies, candy, other junk food
Dislikes: fire, natural disasters, mean Pokemon, getting dirty
Accessories: old-fashioned military hat, purple scarf
Short bio: Orville comes from a big family of Magnemite, Magneton, and Magnezone located in Electron Town, an electric-infused town in the south of Theta. He is the great-grandson of Oriana, the town elder. He's had a happy, relatively trauma-free childhood, and grew up hearing tales of long ago from his great-grandmother. He's trained a lot, so he's rather young for a fully-evolved Pokemon. He joined in the hopes of going all sorts of places protecting other Pokemon from harm. He has been a member of the Thetan Exploration Society for a little over a year.
Other info:
- He has four older siblings.
- His uncle is the local sheriff.
- His family is fairly wealthy, so he has quite a bit of money on hand.
- His age is undisclosed, but he would be the equivalent of someone in their early 20s. His great-grandmother would be the equivalent of someone over 100.
- His birthday is June 30, which makes him a Cancer.
- His favorite food is rainbow cake. 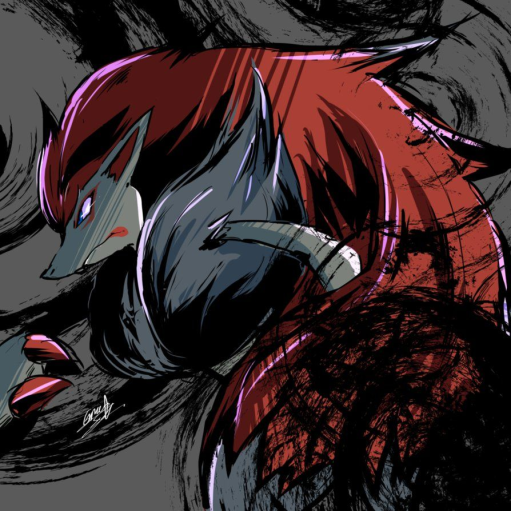 Held Item
Wise Glasses (though he does not actually wear them)

Personality
Once Zaris considers someone his friend, he will fight to his dying breath to protect them. He can come off as a bit sarcastic and coarse in a conversation.

Accessories
A crudely made necklace bearing a Mightyena fang around his neck, as well as a maroon scarf.

Short Bio
Zaris comes from a since-destroyed village that used to reside in the Umbra Woods in Theta's east, said to always be in a perpetual state of starry nighttime. He and a number of others of his kind lived in tranquility, until a gang of Poochyena and Mightyena called the Nightfangs assaulted the village, leaving nought but destruction in their wake. Attempting to spare their only son from their wrath, Zaris' parents pleaded for him to run away, and run he did. Alone and having to fend for himself in the wild, Zaris made his way to a jungle, where a Pangoro elder of another village took him in as a new resident and taught him to fight. Now much stronger and evolved, Zaris returned to the ruins of his old hometown, now a hideout for the Mightyena gang. With his newfound strength, Zaris battled their leader mano-a-mano and bested him before removing one of their fangs as a symbol of his victory. As perhaps one of the newest members of the Thetan Exploration Society, he brought great power to the table, though befriending him would prove to be somewhat difficult.

Other Info
- Zaris doesn't have very much in the way of personal wealth, but is willing to work to earn money.
- Though he has a new home in the form of the Pangoro's jungle village, Zaris considers himself something of a wanderer.
- His birthday is May 13, making him a Taurus.
- Though Zaris possesses something of a rough outer personality, he has a soft spot for food, his favorite of which is Berry stir-fry.
- The fate of Zaris' parents is presently unknown.​
Last edited: Oct 17, 2021

Name: Eggbert. but the only person who knows this is his father, everyone else just calls him bert.

Personality: is kinda show off ish. Is ready to fight with anyone, until the fight begins, then he may teleport away. He always tries to be some kind of leader.

Dislikes: Pokémon with a harsh attitude

Accessories: he constantly carries a stick with a pouch that holds a bunch of berries and fruits that he calls his leftovers. He uses this to heal every once in a while. He may offer some to other pokemon if he doesn’t get bad vibes from them.

Short bio: he has been around for a while, but has never really been the kind of Pokémon to finish a battle, so he never evolved into a kadabra. He truly wants to evolve, but has no experience.
Other info: he was raised alone by an electabuzz that took him in when he was young.

(Both accepted! Let's wait for one more person and then we can start.)

(Is there a OOC so we can talk about the rp and stuff?)

(I'll be making one once the RP starts. I just need one more person to sign up and then we can start.)

(Sorry if I was meant to wait for a reply on the original thread, I assumed if you were interested you just head here? Also I hope I'm allowed an eevee x'D)

Name: Rowan
Species: Eevee
Type: Normal
Gender: Male
Abilities: Adaptability
Attacks: Shadow Ball, Iron Tail, Bite, Headbutt
Held item: Everstone
Personality: Pleasant enough. He has a roughness to him, not afraid to poke light fun at someone and quite happy to speak his mind; he's more of a rogue by nature but is overall often out for a good time- often willing to lend a hand, even more so if it'll benefit him.
Likes: Forests, trees, various berries
Dislikes: Large crowds, show offs, snobby folk, deep water (more of a phobia than anything)
Accessories: His everstone he had made into a sort of collar he wears constantly with a green bandanna over it.
Short bio: He lived a sort of nomadic life with his parents, an umbreon and espeon, who taught him all he knows about stealth and defense; he believes they both worked as hired thieves but he was never really sure. He's also not 100% what happened but one day both his parents just vanished with no warning. Since then he's been stealing when he could, sometimes working legit but just living life how he wanted before he was recruited into AES where he has remained for two years, more or less.
Other info:
- The everstone was gifted to him by his father and considered his most and only prized possession.
- Never stays in his permanent home, mainly using it as a storage, and just sleeps wherever he may end up. Out under the stars his is fave place to be.
- Star gazing is his usual pastime.
- Birthday is January 24th, making him an Aquarius.

I actually don’t have interest in this rp at the current time, in the weeks since this was posted i started reviving an old one and preparing for other roleplays. I honestly completely forgot about this one. If it had started earlier I would definitely be a part of it but, im waiting on too many things that Im actively looking forward to.

Name: Spud
Species: Spinda
Type: Normal
Gender: Male
Abilities: Tangled Feet (raises evasion when confused)
Attacks:
Dizzy Punch (20% chance to cause confusion)
Rest (heal fully and sleep for 2 turns)
Sleep Talk (uses one other move while asleep)
Teeter Dance (cause confusion to all adjacent)
Held item: Safety Goggles (protection from weather and powder)
Personality: Spud is easy-going, curious, and somewhat reckless. He sometimes gets into trouble because of his carefree sense of adventure, but there's not much that can get to him. He values his friends above himself and would rather resolve conflicts without fighting.
Likes:
munching pecha berries, swinging in a hammock, dancing with friends
Dislikes:
stepping on sticks and spikes, bad smells, loud noises
Accessories: his trusty green-and-red goggles, which he wears on his forehead, and a tattered yellow scarf around his neck (it doesn't do anything)
Short bio: No one really knows where Spud came from; he just wandered into town from somewhere else. Even Spud has no memory of his origin. This doesn't stop him from trying to make the best of whatever comes his way.
Other info: Spud doesn't have the highest IQ, but he tries his best.
You must log in or register to reply here.

Fantasy land of the free // cs

Fantasy Sing me a Song of Silver and Gold [CS]