Fandom Pirates of the Hyborian Seas 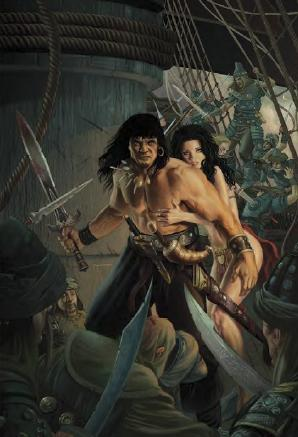 Hyborian Map
World Map
Kingdoms of Hyborea
Black Kingdoms​
Welcome to the world of Conan, Hyboria. It is a world of high fantasy. For those unfamiliar with the series of books by Robert Howard, Hyboria was human-centric. That is, there wasn’t much in the way of non-humans - unless you counted demons and monsters. For the most part, if it wasn’t human, it wasn’t friendly. (Note: There were also some very notable Conan books written by L. Sprague de Camp and Lin Carter. One could consider then fanfiction that became accepted as canon lore.)

Note: This will be an Alternate Hyboria.

This RP will begin as a seagoing adventure. A group of women from very different worlds have found themselves trapped in this age of barbarism. Their greatest advantage is their ship, which is the equivalent of a galleon. No cannons, but then Hyboria lacks black powder. They rely on archery and boarding actions.

These women have already come to the conclusion that this is a man’s world. And the only thing that is going to protect them will be men. So they have made the decision to hire a crew. It is a risky idea. They can dress up like amazons all they want, but that may not be enough. You see, their ship is a 144 foot catamaran. The catamaran was a 19th century development. And ships over 100 feet long are very rare in the Hyborian age.

I am going to start the RP along the coast of Argos. This region would correspond to Greece, Crete and West Turkey.

Characters
I am looking for characters along the lines of Conan. No, not a bunch of barbarians. Barbarians are really from further north.) I mean characters of high adventure potential. They should be at home in a Conan story. They do NOT need to be saints. Some morally grey is going to be necessary to survive. Overall, the ladies are Good. Most came from law-abiding backgrounds. But when people take one look at their ship, they are going to have to learn to defend themselves.

Ultimately this RP can lead to Nation Building. In the books, Conan was given a prophecy that he would become king, a destiny he fulfilled by conquering Aquilonia. He annexed a number of other kingdoms all around him and faced off against threats that had been around for a thousand years. (Aquilonia was landlocked.) This is not something one can do from a ship though.

Posting
Modestly literate, decent spelling and grammar
3rd person, past tense
Looking for typical posts of 400-600 words, but quality over quantity.
Committed (not a post every week or so)
You must log in or register to reply here.

Fantasy The curse of the Blood seas...

Fantasy The Crew of the Falcon and their Many Misadventures
2

Fantasy The Forgotten Siblings |A Story of Growth| Currently Open