Throughout the ages, mankind has faced opponents that called for triumph. Against mother nature, as ferocious as she can be, forced mankind to evolve mentally. The species learned to adapt under the destructive woes of nature. Their next greatest opponent were animals. A plethora of species varying in shapes and sizes, originating from diverse terrains throughout the world. Mankind evolved once more, using their brains to outwit the animals superior in brawn. Once again intelligence prevailed, this time allowing mankind to believe they were masters of the world. Soon advanced civilizations would spawn as mankind made extraordinary leaps in technology. Powerful creatures in their own right, mankind seemed to reach completion.

The 20th Century ushered in an uncanny phenomenon when humans had been documented to possess inhuman abilities. Once a peaceful world began to unravel as fear developed. It seemed that Gods embarked on the world, living among men. There were those that called for the extinction of these super humans. There were those naturally envious, filled with jealous rage because they inherited great power. Then there were those at awe of such extraordinary power, enough to spark curiosity. Agencies and government raced to establish footing in the changing world. Each passing year, the numbers of gifted individuals appeared. The powers developed, becoming abundant in power and complexity.

These super human abilities served as the catalyst to breed forth the next opponent for mankind. Although humans had always entered conflict with each other, these extraordinary powers became the new tools for warfare. Petty theft and squabbles turned into community disasters because those with control wanted to assert their dominance. Conflict worsen when those with the will to protect naturally felt obligated to clash. These international and domesticated wars destroyed many homes and lives. Mankind seemed doom.

After years of turmoil, the United Nations established a code of conduct for world safety. This coalition banded together to remove extraordinary abilities from warfare. They also instructed the members of the nation to develop rulings to govern their citizens with these super human powers. Although nations were already in this pursuit, an example being Japan, their early endeavors helped mankind gain footing in this mysterious phenomenon. Japan had entitled the phenomenon as “Quirks” and discovered that the powers derived from mutated genetics, which eliminated the worldwide belief that they were gifts from the Gods. This revelation helped mankind regain its sense of humanity.

Despite the legal and civil footings established to protect the world and its people from themselves, peace teetered on the lines being maintained or abandoned. Despite the strives to keep order, there were those destined to be chaotic and rebel against the regime. As natural those individuals may be, there were others who sought the need to stand up against these tyrannical rebellions. This dichotomy gave birth to law-abiding citizens and law-breaking criminals. The terms hero and villain became popularized as society began to place labels for citizens that defended justice and those who abandoned it, respectively. The world began to celebrate its saviors all around and shunned their tormentors.

Fairy tales had legitimately become real, anyone could dream to become a superhero. The clock turned and the 21st Century arrived – dreams became real life for the world around. The judicial and legislation systems were drastically overhauled for properly handling villainous criminals. Nations had finally developed the infrastructure for official Superheroes. The infrastructure included a bureaucratic chain of state legislation and government funding for academia institutions designed to train and usher in superheroes. 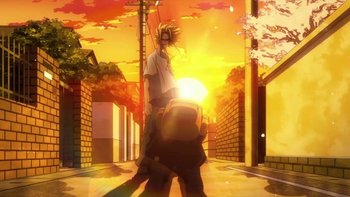 Legends aren't born! Legends are made! From the humble beginning of those seeking glory, they strive to rise to the occasion to establish their legacy. Legacies crafted from the ambitions and actions of those extraordinary. Born with powers that exceed the capabilities of mere mortals, everyone is destined for greatness. Remember, Legends aren't born. Legends are made! However, every legend is different from the other. Every legacy leaves a wake of darkness in its wake or a shining ray of hope. The question is, what type of legend will you be?

Can I join please?

So whats the concept for the RP itself? Like characters being a UA class?

yandere queen said:
Can I join please?
Click to expand...

PlusUltra said:
So whats the concept for the RP itself? Like characters being a UA class?
Click to expand...

Yeah pretty much. The story will revolve around the students of a class at U.A. and their adventures in becoming Pro Heroes. There will be smaller plot points like arcs that will come together to make a whole bigger plot.

Supporter
I think I'd like to join this if I can

Legends di Angelo said:
I think I'd like to join this if I can
Click to expand...

Yeah pretty much. The story will revolve around the students of a class at U.A. and their adventures in becoming Pro Heroes. There will be smaller plot points like arcs that will come together to make a whole bigger plot.
Click to expand...

Ok cool. I imagine this is going to be OCs and not the canon characters

Legends di Angelo said:
Ok cool. I imagine this is going to be OCs and not the canon characters
Click to expand...

Supporter
Ok sounds good to me

Ok I will use Lucy

Welp seeing as ya running it jap I’ll be here

Seeing as this got a decent amount of interest, I will get a character thread up soon.

Do you hear it? The screams of Gacha salt?

You shoo! Stop followiing me!

Hanarei said:
You shoo! Stop followiing me!
Click to expand...

Through all the heat, my heart still beats

Roleplay Availability
Roleplay Type(s)
A bit interested! What's the max amount of people you're searching for?

RemindBlue said:
A bit interested! What's the max amount of people you're searching for?
Click to expand...

Honestly, I was thinking depending on how many people we have, we could have several classes. I was thinking 10 students a class with a teacher assigned to each. But I want everyone to get the chance to show off and be apart of main events and arcs. So I was just having trouble thinking of a way for multiple classes to get equal "screen time". Wouldn't want anyone to feel like a side character. But that's just an idea. To clearly answer your question, as of now, there isn't really a max amount of people I'm looking for.
You must log in or register to reply here.