Like most Gym's in the Johto League, the Electric type gym is a sprawling campus laid out similar to a college, with the east and west wings devoted to classrooms for general study, and the large main building housing the training complex and battle stadium. The stadium is one of Chance's own design, as are many of the gym leader's abodes. It is a sprawling flat concrete slab the size and shape of a football field, with pillars of plaster and sheet rock spread regularly throughout in similar fashion to a car park. The ceiling is forty feet above the ground. Each pillar is ten feet apart. The pillars hold no structural purpose, and are brittle enough to be damaged by medium strength moves, and obliterated entirely by strong ones. The destructible environment is meant to ensure that one has plenty of cover, but it does not obstruct the movement or abilities of larger or more powerful pokemon too much.

Overlooking the stadium is Chance's personal box. He enjoys hosting in house tournaments and exhibitions, with corresponding brunches and afterparties. As such the loft-style apartment has ample living area and a wall-length window viewing the fighting area below.

Ryumaru Ninja Clan/Sky Dragon Village: The ninja clan Ryuko hails from. It is well known by many outside of the village's walls for their unchallenged prowness and wisdom in combat. The main attraction here is the three story pagoda in the center, home to the Ryumaru clan's royal family. The Royal family are all true descendants of the founder of the clan and the first Dragon type human to come into being. Ryuko herself is the heir to the throne. 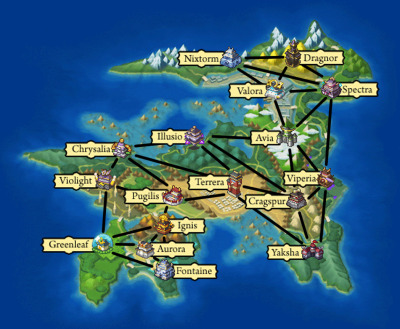 In the region of Ransei, far away from Johto, it has been centuries since a young girl from Aurora took on the notorious warlord Nobunaga, united what was then seventeen kingdoms, and brought peace to the region. These kingdoms were:
Since then, an eighteenth kingdom was discovered -- the Fairy-type kingdom of Hikari located at the islands off the coast of Valora, north from Chrysalia and Illusio. It was eventually followed by modernization of the existing kingdoms, all while retaining the vibes of their respective types.

Among the citizens of Ransei, there are people who can form special bonds (i.e. links) with Pokemon. Such people are called "Warriors". While Pokeballs do exist in Ransei, they only use them after linking with a Pokemon, not before. The warriors' types (both main and latent) also double as their affinities to Pokemon of those types even before activating their latent ones. In the case of one true type though, that one type will be their only affinity.

Warriors who rule over kingdoms are called "Warlords". Some kingdoms have a long-running history of certain families and/or clans being warlords there, while some others choose theirs based on the individual's merit. A warlord's latent type is usually their true one, though it's not always the case. There are bound to be exceptions to the rule, after all.
Last edited: May 18, 2021
You must log in or register to reply here.