The Dapper Mog said:
I also have a fun ranger build in mind, but I think they won't really work in the frigid regions of Icewind Dale. Lol
Click to expand...

Pretty good for tracking and survival in the area if you still want it.

WlfSamurai how do you feel about tasha's optional ability score change rule ? i'm thinking of placing +2 in con and +1 in wisdom, or the other way 'round if it's alright with you ? if not, i'm totally good with the normal leonin increase
Click to expand...

Yeah! The Tasha’s race rules are in play of your want them. I like the idea that you can play diverse people within a species that may be better or worse at various things.

alright great ! and for character sheets, do you prefer them to be on site or could i send it in pdf ?

noleraii said:
alright great ! and for character sheets, do you prefer them to be on site or could i send it in pdf ?
Click to expand...

oooh, okay— in that case i can do it on google sheets so it's updated !

The Dapper Mog said:
Here is my goblin wizard. 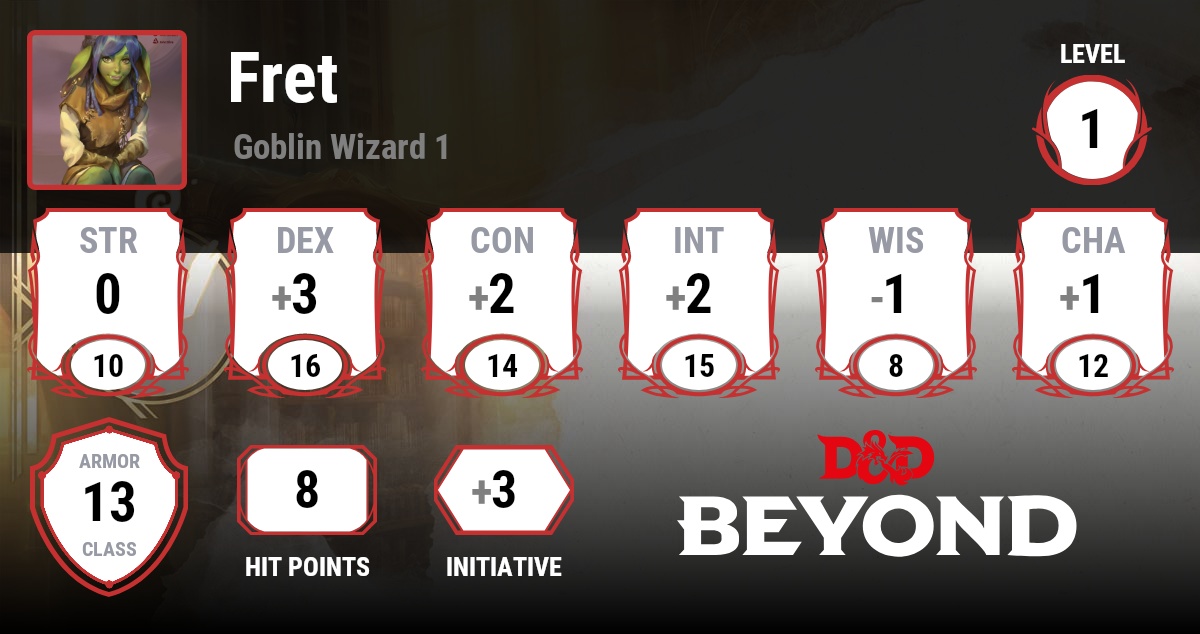 My group uses D&D Beyond so this is the easiest method for me. However, if you would prefer, I can arrange a sheet for the site too.
Click to expand...

She looks great! She's complete as-is, but did you choose a background? I wasn't seeing it on there...

WlfSamurai said:
She looks great! She's complete as-is, but did you choose a background? I wasn't seeing it on there...
Click to expand...

That's weird. She's an urchin. I see that the shareable version doesn't include my notes either. If you're curious, I can also send her short background to you.

The Dapper Mog said:
That's weird. She's an urchin. I see that the shareable version doesn't include my notes either. If you're curious, I can also send her short background to you.
Click to expand...

No, that's fine. Just trying to get a feel. Thanks!

should we use faerûn locations and canon lore when making our character ? i don't have the best knowledge of it, but i wanted to know if we could make our own sort of orgianizations or places. though i think for places i could stick with canon, mostly wondering about the organization.

I have my cleric done, and I just need to type him up and format the sheet the way I want it.

Did all the number stuff just need to figure out the personality and backstory stuff while also figuring out the name.

Fear her she has paint!!

noleraii said:
should we use faerûn locations and canon lore when making our character ? i don't have the best knowledge of it, but i wanted to know if we could make our own sort of orgianizations or places. though i think for places i could stick with canon, mostly wondering about the organization.
Click to expand...

Great question. This will be Faerûn and we'll be using the factions and such within. I was just writing up some information for you! Check it out:

So, a few items to note while you guys are working:

An example is that a lot of the early adventure is very sand-boxy. I’m hoping to give you more concrete direction and keep it moving.

Information and rolling
This is more to give you heads-up about my style. I lean more narrative-ist with hints of OSR. You may find I give you more information than you’re used to. For instance, if you describe your character searching a body or looking through drawers, that’s not a investigation check. I tell you what you find. Or, if there is a hidden enemy approaching, I will be making “soft moves” as-in small clues in-game to see what you do rather than just doing a perception roll.

Tying to above about rolling, I’m typically only looking for rolls that have some sense of danger or consequence to failure rather than making your roll to interact in-game with things. Also, I prefer to “fail-forward” which is an overly fancy term for failures on rolls being interesting. No matter the roll, my goal is use it move the fiction forward, regardless of failure or success.

Hopefully that makes some semblance of sense. Basically, the summary is that I’m aiming for high immersion and RP over rolling for every little thing. I’m looking to keep the action and game moving.

Scene framing
Just another preference. Where I can, I’ll try to enter a scene later in the action and leave it earlier to keep the story pace up. This may not always work out. But, I’ll do my best.

Player questions
There may be times I ask questions for you to answer about your character or the world to establish something about either. I enjoy engaging players in light provocative questions to build world stuff or their characters. This is a published adventure, so there will be less. But, I still may do it for fun.

Stars and wishes
This is something I’ve started implementing in my games and I really like it. At the end of Chapters, before we jump into the next, I’ll ask for Stars and Wishes.
Stars: you give kudos to the players or DM for RP or cool scenes you liked. This is just a way to say, “Hey, I really liked XYZ in this Chapter. That was fun.” Or, “I liked how you RP’ed that scene!” Etc.
Wishes: What do you wish to see next Chapter? What interests you that you hope we can see in the next Chapter?

alright cool ! luckily i didn't have my character be from a city, so i just changed up the forest locations :'D

excited to see your dm-ing style in action ! i like roleplay-heavy rpgs as much as the next person, but i haven't had the chance to play in a game that is such so this'll be a first, but i'm sure i'll love it. also i love the stars and wishes thing !

and as a by the way, i'd love a trinket from the icewind dale book if you could ! i haven't rolled for those in previous games, so this should be fun.

I want an icewind dale trinket as well, if you do not mind

Oh also, my character idea is basically a half-broken down warforged being with a wiped memory and was found and subsequently partied up with one of the party members. So whoever wants a damaged Warforged Envoy tagging along with them, please tell me either here or in dms.

Supporter
I'm working on a Minotaur fighter, so I'm down with that.

Sherwood said:
I'm working on a Minotaur fighter, so I'm down with that.
Click to expand...

Is that a response to my msg or to the general gm one?

Just asking because I want to make sure

oooh, i think i would love having a damaged warforged tag-along. obviously, my druid would not be as pleased, but he'd be intrigued enough. he's been travelling a lot before his arrival at icewind dale, so it's likely he could come across your character.

Firelie said:
Is that a response to my msg or to the general gm one?

Just asking because I want to make sure
Click to expand...

Well this is a bit of a predicament.

Maybe the three characters partnered up or something or whatever really. Not that important, should be easy enough to figure out.

As a warforged, what would my AC be lvl one with a dex modifier of +1 and composite plating? I got 16 but that seems kinda high for level one

Supporter
I have a 16 AC with my Chain Mail armor. I could get as high as a 19 if I went with shield use and one of the Fighter class features to get a +1 AC

I see, so the average AC isnt that low the current party is just very very squishy

Oh yes! Three more, more mechanical, things!
I'm adding all the stuff I mentioned above and here to the first post in this thread, FYI.

Icewind Dale Trinket
Adventuring gear
Icewind Dale Trinkets
d100 Trinket
01-04 A small wooden figurine of a yawning walrus, painted in red and black
05-08 A pair of scrimshaw cufflinks with an image of a fisherman on a boat engraved on them
09-12 A small iron key with a frayed blue and gold cord tied to it
13-16 A small illustrated book of Northlander myths that has pages missing
17-20 A damaged scrimshaw cameo depicting a merfolk
21-24 A stone from a burial cairn with a tiny Dwarvish rune carved into it
25-28 A ripped cloth sail with a symbol you don't recognize
29-32 An Ulu knife with a scrimshaw handle
33-36 A jar containing an unidentifiable, sweet, sticky substance
37-40 A delicate glass ball painted with snowflakes, capped by a metal loop with a tiny hook attached to it
41-44 An expedition log with missing pages and a pressed flower used as a bookmark
45-48 An owl figurine carved from whalebone
49-52 A sewing box that smells of old wood and has three spools of blue thread inside
53-56 A scrimshaw-handled ink pen with black runic designs along its length
57-60 A brooch made from a small insect encased in amber
61-64 A scrimshaw pepper shaker etched with the letter W
65-68 An old, wooden-handled ice pick stained with blood that won't wash off
69-72 A fabric doll bearing an angry expression
73-76 A set of wind chimes made from seashells
77-80 A beautiful silver tin that, when opened, emits the smell of rotting fish
81-84 A bloodstained dreamcatcher made from fishing line, gold wire, and snowy owlbear feathers
85-88 A figurine of a polar bear made of ice that never melts
89-92 A snow globe that doesn't need to be shaken
93-96 A piece of sea glass shaped like a unicorn's horn
97-00 A dark blue scarf that gets lighter in shade the higher the altitude of the wearer

I found the trinket table from the book
You must log in or register to reply here.

Fantasy Aeskinaep: I Was Reborn As A Mob OOC
2 3

Yesterday at 9:27 AM
A Sparkling Zombie