Which never seems to die, and perhaps never will.

As its basic premise, Recall Protocol will tell the story of the Guild of Heroes and its glorious (or not-so-glorious) return to the conflict-shorn kingdom of Albion, as well as its surrounding territories. Although the focus will be on the Guild's return and its activities, you can play as anyone - a villain, a non-member, or a mere bystander whose fate happens to be entangled with the events brewing around them. Around you unfolds an endless fractal beach of possibility, whose waters are dreams, and whose shore is the mind's creative spark. 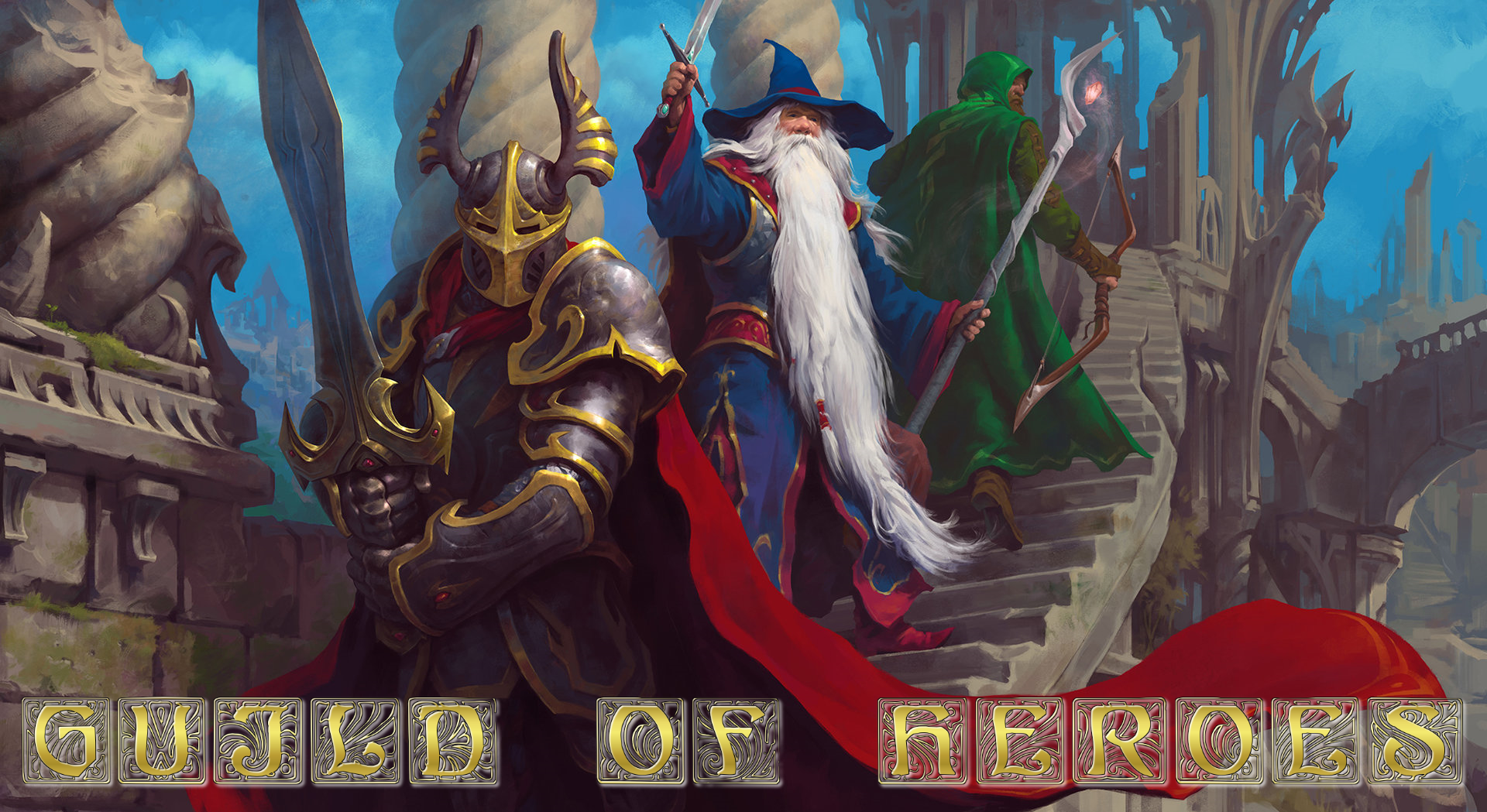 RECALL PROTOCOL ​
Around the world, hundreds of heroes flash back into existence from their imprisonment.

These are their stories - the stories of their glorious return, their song of champions - and their fight against the Overlord.

"Not everyone wants to be saved," said the first voice, admonishingly.

"Not everyone can be saved," said the second voice, modestly.

"And yet, we'll still try," said the third voice, resolute.

- A Threnody of the Founders, Vol. II.

Around the far northeastern fringe of Albion would be what most of its citizens defined as, 'desolate.'

Around this part of the country was the small, perfectly unremarkable barony of Hessen. There were no major cities within the barony - the closest one would have been Tirin, a good sixteen hours of uninterrupted horse travel away; and that was presupposing that you were fortuned with good weather; a trait this region wasn't known for.

There was, however, in the middle of nowhere, a small village known to its citizens as Caspul Village. And down the cobblestone path, deep into the woods heading in the direction of the heartland, one would be able to find the only tavern and inn within the general giant-spitting distance: the charming Doldrum Drummer's Chantry inn. A three-floor building of rickety wood built in the post-and-beam style; yellowed walls and thick lengths of dark timber leading to a double-door with a transom of mottled, stained glass. Around its entry pillars hung slightly dried, husky vines. The interior was relatively empty for lack of travelers, manned by a hunky-looking half-orc occupied with cooking an entire pork on a spit roast.

And it's within the very middle of this unassuming inn that several people flashed into existence simultaneously, after months spent in the void. All that heralded their approach was a sudden poof of wind, a loud whistling noise culminating in a tinnitus-inducing bang, and a flash of amber light.

"Agh!" The half-orc barkeep fell over in surprise, clattering over a chair. One of the few patrons who were present in the room almost spat out his drink.

At the same time, in the capital city, Bowerstone...

"My Overlord." Salazar Dalmon, one of the High Stewards of the Royal Court, bowed very deeply in Kyro's direction, right hand moving up in a circular motion and left foot gently inched back as was common for such a greeting towards one's supreme lord in Albionian custom. And then, a shallower but still respectful bow towards the woman in the coat. "Your Worship. Thank you both for seeing me on such short notice. I am happy to say that in coordination with the ARC Advanced Ritual Research Division, we've managed to complete a working sorcerous blueprint for the project you requested. All it requires now is your stamp of approval."

Respectfully, Dalmon handed the papers, scrolls, and blueprints over to one of the courtly attendants, who brought it directly to Kyro.

Across the dark parchment bearing the insignia of the Albion Research Center, there sprawled an extensive and detailed blueprint - arcane symbology and system efficiency graphs, mana rotational output requirements, geomantic line predictions, leyline tap designs, physical architectural outlines, a rough geographical display of the device's reach, on top of other minutiae. Another few papers showed the rough, expected costs. Above it all was the unifying label of the project, the glorious seal of words - a script, ironically - which'd finalize Kyro's hold over the country if realized: 'Albion Defense Grid.'

A project that'd cost innumerable hundreds of golden talents and lesser coinage to construct, maybe as much as twenty percent of the royal treasury to initiate, and then another such quantity over time to supply wages, resources, and ingredients for the ritualists and sorcerous workers. A project spanning the entire nation, using up innumerable millions of hours of man-labor and machine labor; resources would be fed to the ravenous beast of industrial and military development like coal being shoveled into a bottomless pit. The Grid's power source alone was ridiculous, costing more than sixty percent of the entire blueprint outline, and being the main timesink in terms of construction time. Its core element would be an energy harvester placed on the most powerful leyline node on the nation's land, supplemented with elemental power-gatherers. One of the Sarafan volcanoes would provide energy for the entire infrastructure of the northern half of the country, using a geothermal vent and magma processor that'd have to be drilled far into the mantle. It'd also have the side effect of boosting the local stoneworking and steel economy; a very, very minor boon compared to the real, tasty prize in front of his eyes.

It was sad, then, that it'd take months - if not years - to complete even with these outrageous, almost inexcusable expenditures, when he needed it finished yesterday. In a few days from now at the latest, if he was planning to not face significant resistance from his enemies lurking in the shadows.

After some minor questioning and small talk with some of the High Stewards present in the room, the door opened, as a pair of high-ranking warriors in outfits of dark green lamellar in coats of dark leather - both of them bearing the insignia-markings of Captains of the Snake Circle, the infamous black ops group.

One of them approached Kyro and whispered into his ear, "We have confirmation, sir. Type-A incident, as you said. Two minutes ago near Tirin. Should we dispatch a response team?"

And so the heroes traveled - weary and battered by their constant day of battles, and tired by virtue of not having slept for well over twenty-four hours. They went north and west, past the pale muddy streams and hacked forests, all in the cover of darkness, slogging across fields of clart and mire reaching up almost to the knees that stuck to their footwear and legs, perhaps encountering hostile insects such as mosquitoes on the way. At least Jaunt and Sophia had the fortune to be unconscious as they were jostled through this journey. At the end of it, the trek, which took a quarter of the night away, left most of them feeling miserable, lousy, and even more tired than they had been before. It was noticeably worse for those who'd started out in Albion and were there to experience all of the vast treacherous difficulties involved.

At the border, they were briefly accosted by the Albionian guard.

"Cyrus of Trostenvald," said the wizard. Although, given the effects of the journey, he looked more like a hobo - and this was noticed by the guards who observed his claim with some amusement, a few of them holding back laughter.

"Nonsense," said the watch sergeant. "He is dead."

"Then prove it. Cast a spell."

At that, the wizard growled, "I cannot."

As if his patience had ran out, the watch sergeant lifted his brow, "And why not?"

His growl turned into something like a sharp, rising invective against the sergeant, "Because good magic is wasted on the eyes of blithering morons." Before the man could reply with anything, Cyrus continued; "Can you not see we're carrying wounded people? We've been fighting sources of danger and unspeakable peril for the entire day. We have not slept. We have not rested, and you have, in this single conversation, exhausted every last remaining mote of patience and good will that I had. I apologize for calling you a blithering moron, but if we cannot pass through here, at least let us claim sanctuary and take care of our wounded, and we'll figure out the problem of identities in the meantime."

"Very well," said the watch sergeant. "In accord with international legislation, I'll let you claim sanctuary. However, if our body determines this was done in order to abuse the good will of the people of Albion, you will be prosecuted to the fullest extent of the law. Bring them in."

And so, the heroes were permitted to stay in the outpost on the border, given a single boarding room - the sort used for refugees - to stay in, as well as some military rations to dine upon - or rather, fast upon, as on the distant eastern horizon, the first hues of amaranth and orange started showing near the edge of the world; heralds of the sun's rising.

"Settle down," Cyrus told everyone, sitting down upon a large box filled with figs. "We're not safe here, not yet, not truly - but it'd take even someone like the Overlord some time and effort to arrange an assassination of an entire group of people under sanctuary at the border. If he did so improperly, it could be an international scandal. Anyway, there is no way they'll be able to confirm out identities without outing ourselves as heroes, and therefore enemies to Script's reign. I already foolishly presupposed that throwing my reputation at the man would allow us to pass."

"For this, I apologize, as it might've put us in severe jeopardy. Here is my plan for now, and I want your input for this - we'll stay here for a day, or two at the most. If Sophia and Jaunt do not recover in that time, we'll use magic or other means to speed up their recovery. In the meantime, our focus will be on resting and helping them recover. We don't need to feel good, we simply need to feel good enough that an escape from here will be possible, either by tomorrow or in two days. After that, we'll go to Laurellia and claim refuge and sanctuary from them, revealing our identities as Guild members. And from there, Guildmaster Mephisto should likely be able to locate us on his own, eventually, so all we'll need is to wait."

"And now, another matter," Cyrus said, addressing, in turns; Claire, Solomon, and Sasha. "I don't know who you are. I would assume that our culmination in the spot of battle was not accidental - it was fate, but not luck. In any case, I would like you to introduce yourselves, good people, to me and our compatriots respectively."
Last edited: Feb 9, 2022
Index
You must log in or register to reply here.
Share:
Facebook Twitter Reddit Pinterest Tumblr WhatsApp Email Share Link