I havent rped here in quite some time, years I think? But Ive been feeling that rp itch lately, and wanted to get back into it! So forgive me if theres jank, haha.

Okay, look, Im not great at interest checks! Haha, so I'll just say what my rp plot/idea thing is. :>

My rp takes place in a fantasy world called Eaethix, the Split World

Basically the plot is this. Something happens to your character, which is then forced (for some reason you come up with) into Wraevadar, the Dying Realm. Which is essentially this expanding, feared place of evil and corruption. Then our characters meet up and decide that its better to travel as a group in Wraevadar, rather than alone.

Wraevadar is filled with all sorts of crazy crap. Evils. Monsters. Curses. And our group will essentially just come across whatever i think up (or whatever someone else thinks up and i approve of) and then our characters try to overcome it.

Crazy crap can happen like ALL the time. Even near-death, like horrific mortal wounds. My char will have the ability to basically heal peeps near-death (for as long as i decide to have the power), so all sorts of crazy stuff can happen just for fun. Itll be relatively mature themed, but still kinda have a light-hearted tone enough to just be fun. This rp is made with the intention of "If youre bored, or tired of waiting for other rps, come here".

I have a google doc of notes about the world for anyone interested. Which I will expand on as need be.

For reference, heres my char.

If you have any other ideas, and ideas for your char, let me know!! Oh and, I kinda want peeps to have like, their own curse, maybe their own godly-connection. Their own powers, equipment, etc. Their own strange mystic race, whatever. Run it by me and we'll discuss it if it works! :> 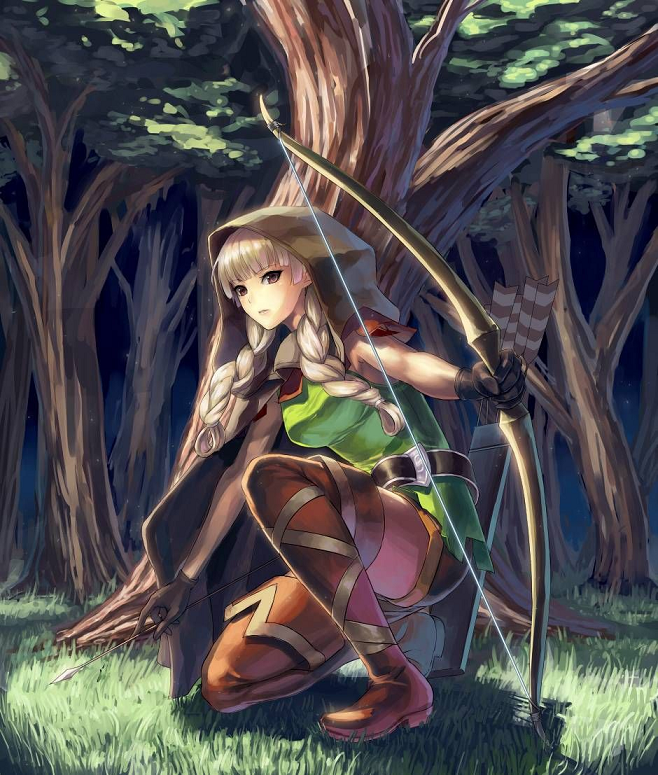 Race: Hyu Elf
Race Explanation:
Hyu Elves are a race with mixed human and mixed elf blood. Their blood can be donated to either race, and has healing properties. They have stronger wills, and life spans and are typically quite dexterous. Their eyes are better than humans’ and can mystically see in the dark. They are weak and susceptible to mystic disenchantments and mind attacks. Especially curses.

About:
Faiglyn is a Dryar. Which are what the warriors of her village were called. Trained by her father and brother, who are esteemed Dryar. However, like many of the females in Qhuon Village, she was trained as a priestess as well. Something she did fine, but never really focused on, preferring her Dryar training and job.

As it so happened, the Successions were taking place. The Successions are where girls are to succeed the older priestesses, taking their place and duties as the new Priestesses of whatever god. Priests and other religious Zealots from the Grand Cathedral arrived in Qhoun Village. Unfortunately for her, after their tests, Faiglyn was determined to be the successor, and was told she would be the next Priestess of Airros, the god of the sky, storms, and known for quick retribution. Faiglyn never believed she would be chosen. She didn’t even care about the gods, or priestess duties! Nor did she act them out particularly well!

But her feelings didn’t matter. The tests said she was to be the successor, so she was taken and made to perform the Priestess Ritual, which would forever cement her as a priestess, bound to her duties. Just before she finished it, her heart faltered. Knowing she didn’t want this, she sabotaged her own Ritual. Resulting in a massive attack from Airros in retaliation. Which cursed her. The god’s strike also killed many in attendance of the Ritual. Which was a large number from her village, many from the Grand Cathedral, priests, priestess attendants, and the like. Including her own father and brother who were watching her ritual. Her mother was also in attendance, but was able to survive. However, afterward, she disowned her, never wanting to see or speak with her again.

In further retaliation, the Grand Cathedral sent its Zealots and Crusaders after her. Faiglyn was forced to flee the village who now hated her. Chased by a powerful enemy who had vengeance on its mind, Faiglyn found herself crossing the mystical barrier leading into Wraevadar.


Skills: Excellent archer, tracker, and hunter. Good at traps, and subterfuge. Quick and quiet. Capable of creating unique arrows, like rope arrows, smoke arrows, etc.
Magic: Can call upon Airros’s air and wind from her very-short stint as a priestess of Airros. These wind abilities afford her many unique things one wouldn’t normally be able to do, even surprising her sometimes.

Dryar: A warrior-like profession in Qhoun Village. Dryars are so named due the village’s relation to the Dryads of the forest. The village holds Dryads in high regard, with the people seeking out Dryads for advice and wisdom. Dryars are the warriors that protect, guard, hunt, and fight for the village. Many types of Dryars exist, with Faiglyn steering more towards hunting duties, as she was a natural with a bow.

Airros’ Curse: In punishment for her defiance, Airros laid this curse upon her. She has two stimagata on her palms. Every time she draws her bowstring the marks grow. They are snaking their way up to her eyes. Once there, she will go blind.
Other effects:
Her eyesight gradually dwindles, and at times is painfully blurry. Her chest will struggle to take in air, causing her painful feelings of suffocation.

Dryad’s Gift of Life: Before she left, Faiglyn beseeched the dryads around her forest to grant her a gift. Heeding her prayers, they granted her the gift of life. She carries a pouch of healing waters around with her. As long as miracle water remains in her pouch, she -and whoever else she wishes- can recover from mortal wounds.

Extra Unique Things:
Is very adept at playing the Lyute. Which is a simple flute-like instrument from her village.
Last edited: Jun 18, 2021

All hail the holy mackerel

Is it full of action? Can I use my Soul manipulating warlock robot oc?

robot?
what do u mean robot?

and yea there should be a lot of action? XD i had thought there would be

for the record, Wraevadar is basically another country-like place in Eaethix, its not really anything like an isekai or different-dimensional type place or anything

Spooky fantasy crazy crap?? Sounds like my kind of party, count me in.

sweet :>
should i make a ooc thread? XD i guess the answer is "yes"

imma put up the char thread in a sec, then get started on an ic post i think

but heres the ooc thread to chat! :>

Hi :> this is the ooc, i used to host rps a lot, but then got out of rping for a couple years, but now im back! ignore any funkyness XD i also dont really spruce things up or "make them pretty" so forgive me for that, but if u want to do that for your posts and character, by all means!

theres an ooc if u need to chat about stuff ^^

A Dapper Knight for dapper nights.

I'm rather interested! I have a few ideas in mind, after reading the lore and tinkering with some barebones idea.

sweet! run it by me in ooc!

sweet! :> well pop into the ooc up above, and also look at the char list and lore and stuff! ^^

still looking for some lovely peeps who wanna rp some high fantasy, horror, and supernatural and survival type stuff! X3 romance can happen too

we've technically started a bit, but we're not far, come read what's been posted so far, and see if it interests you! :>
also the ooc is posted above!

Running through forest, brown leather boots pelted the uneven ground with trained expertise. Then with a strong press off of it, the girl leapt through the air. Height shown more than any regular human could achieve, almost like a bird taking off. She caught a branch, swinging with her momentum...

gots another bump for ya :> not trying to put up too many of my posts back to back XD
just hoping to see more peeps! :3

I am completely in! This sounds awesome!

Slimeslug9 said:
I am completely in! This sounds awesome!
Click to expand...

glad to see such enthusiasm! ^^
up above is the OOC where you can chat with us! :>
You must log in or register to reply here.

Nation Building Behind The Walls of Hope ~ INTEREST CHECK!

Realistic or Modern F.T.E.A. No. 1 - An interest check for an experimental "horror" travel rp (open)