Heyo thanks for considering joining my fiction, the bare minimum I need to know about your character will be listed below on the sheet but feel free to add more if you like. While I'm open to most things I may ask you edit or delete something if it seems to game breaking or doesn't fit lore. If you have questions please ask on the check or in a PM or on the OOC page when it is made. Im happy to answer questions and usually do so asap as i hate waiting and assume everyone else does to.
===================

Appearance: (picture is wanted but describe them a bit anyway, what someone would easily notice like height or hair colour)

Talents: (things your good at be it natural or a practiced skill)

Flaws: (No one's perfect, for each two talents list a flaw)

Gear:
(take inspiration from movies, games, whatever...
You could have the shields from borderlands with a light saber,
a knockoff pipboy capable of playing video games or hacking shit,
Whatever it is try and make it fit your character. The Doctor from bunker 187 probably doesn't own a jetpack for example.)
((if you do not list a item etc and your character whips it out I will encourage players and make the npcs treat said character like a crazy person who hallucinates))

Brief background:
(Bunker inhabitants have lived their whole lives inside bunker 187. Never setting foot outside until the rp starts.

Bounty hunters have been in the wastes their whole lives, preferably as apart of a crew. This crew was saved by Uncle Tert and because the man lost his legs to save you and the technology the crew was paid to retrieve was lost in the process... The crew owes bunker 187 a favor.

Doctors and tanks can be a mixture of the two above. Coming from a bunker or living in the wastes. I'd prefer if they were tied to the bounty hunters but either way as it's a group rp make sure they aren't antisocial loners who refuse to cooperate cause I don't want to make it all about recruitment aha)

I'll finish this when I can

Name: Eagle Bang.
What you are?: bounty hunter
Age: 25
Sex: male
Appearance: Eagle is 5ft11 with a athletes builds, blue eyes short black hair and a rough beard. Usually wearing a hat and trench coat like cowboys from long ago. Rugged for his age but luckily not disfigured what with the dangerous lifestyle.

Talents:
Joe is a accurate sonaofa bitch, be it aiming a gun or throwing something.
CQC, get in enough fights you start to learn things, some even get better before their nose is broken.
A certain charisma, not the smoothest talker in the wastes but definitely has a way with words and barter.
Stamina and endurance, need to be strong or smart to survive the wastes.
Decent hunter, able to stalk creatures/mutants or humans and pick up/read tracks.

Flaws:
"Not a hacker", Joe cannot unlock even the simplest computer security.
"I use shit not fix it" joe cannot repair anything beyond his wingbombs or pre war human guns. If the electromagnetic return blade was to fall out of sync with the glove then Joe would need someone to repair it.

"I live like there's no tomorrow" Joe is greedy with most things including money, drugs, drink, food, tech, glory...

"Yea I got a problem" Joe is a addict, if he has something he will enjoy it. If he can take or buy something he will. Rarely effects his performance but over indulging in a single vice usually throws off the balance.
Drinking to much = more bathroom breaks for example.

Gear: (dunno if I can get pictures for every bit of gear but I may have a Google at some point)

A Noligiv Barrier shield, once charged and in effect it will negate a certain amount of damage preventing most cases of potential death. As in gun fire, fire, physical force, lasers, Etc.

Revolver, six shots loaded with more to spare.
Laser rifle, adapted for human use the ammo is fusion cells instead of the rarer alien crystals.

Return blade and glove, basically a large curved blade with a magnetic handle and electronic powered glove that helps in the act of throwing a blade and having it return to you.

Wing-bombs, three sharp, aerodynamic blades form a trifecta but two of those blades explode. The Handle blade is reusable provided you find it after the explosion.

Will determine this with another bounty hunter player. 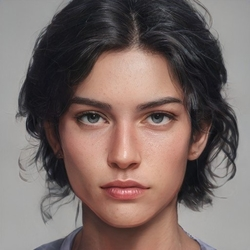 ​
What you are: Bunker Inhabiter
Name: Elizabeth Edwards
Age: 21
Sex: cis Female
Appearance: Only 5'1 but got the attitude of someone who is 6'4. Has a Pear-shaped body, lean with not too much muscle mass
Talents: Determined - Intuitive - Agile - Lucky - Quick
Flaws: A bit on the flabby side (not strong) - Not consistent - Swing first, think later

Brief background:
Has lived in bunker her entire life. Goes out to help jarred because he previously helped her mother a few years ago before she passed. She feels like she owes him.

What you are: The Tank (Engineering specialist)

Brealeil stands at 5'8" with an athletic build. Her hair is a deep brown cropped haphazardly to the length of her angular jaw. She is missing her left arm and both of her legs below the knee, all three of which are fitted with custom prosthetics she designed by hand. She usually has a layer of grime or grease related to her most recent project all over herself. The lower half of her body is littered with burn scars, which she tends to keep obscured.

Talents:
-Engineering/repairs
-Hacking
-Strong (she's been lugging around those heavy prosthetics for years, shes stronger than she looks)
-Lockpicking (she has a few lockpicks stored in her hand)
- Proficient handloader (can make bullets from raw materials)

Flaws:
-Her prosthetics are quite heavy (approx. 70-80lbs)
-Her prosthetics may be advanced, but they are not immune to damage
-Sticky hands (if she thinks it won't be missed, it will probably end up in her pocket)
-Insomniac (she tends to self medicate in order to help her sleep, which has it's own host of problems that come along with it


Gear:
(WIP)
- A suit of power Armour made from mismatched parts she has managed to steal or scrounge up (she doesn't bring this with her everywhere in order to conserve power)
-An assault rifle with a few magazines of homemade bullets
-A small pocket pistol built into her prosthetic hand
- Change of clothes for cool & warm weather
-spare shoes
- Large rucksack (think one of the camping ones with a metal frame)
- Karambit
- A set of tools for field repairs
-A backup charge for the armour
- Large waterskin
- Multi-tool in her prosthetic arm
- Several pieces of preserved meat
- Paracord
-An altoid tin filled with an assortment of pills (for sleep)
- An assortment of knickknacks she has stolen
- Beat-up flask with the initials A. F messily scratched into the surface, half full with gin

Brief background:
-- UNFINISHED--
Brealeil was brought up as the 3rd of 7 children, with parents who lived in a small outpost not far from a metropolis. As a young girl her family was the victim of a raider attack, burning her home with her family still inside. She lost her two youngest siblings and mother in the raid, along with her legs and left arm. It took years for her to be properly rehabilitated from the incident with the help of her father, an accomplished machinist who taught her everything he knew while she was confined at home. Once she was old enough to leave the nest, she set out on her own to make a name for herself.
(I will write out how she was connected to the bounty hunters later-- I'm going to run off the assumption that she would have met them repairing some gear for them until I work out something concrete with someone)​
Last edited: Oct 19, 2021
You must log in or register to reply here.