Risen from the dead 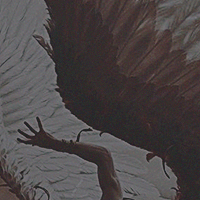 xxxname's jae, they/them and in my 20's. been roleplaying since about 2013, but left RPN sometime around 2017?
came back to the roots to see if i could find a long term partner, or even a couple. i'll get it out of the way that i don't do fandoms,
much more of an original idea kind of person. i work a full time job, but that doesn't affect me too much! what i need most out of a partner
is someone who's 18+ and can match lengths (about 2-ish paragraphs), open to OOC communication/friendship. i'd love to hear
about your day or talk about interests while we rp! i don't require you to reply as frequently as i do, but a few times a week would be great!
i also tend to get really into characters, i might throw out a moodboard or a video that reminded me of them. want to reuse the same characters in different plots? lets do it!


~200-500 ᴡᴏʀᴅꜱ ᴅᴇꜰᴀᴜʟᴛ ✖ ᴍ/ᴍ ᴏʀ ꜰ/ꜰ ✖ ᴇᴠᴇʀʏ ᴅᴀʏ ᴏʀ ᴇᴠᴇʀʏ ᴏᴛʜᴇʀ ᴅᴀʏ ʀᴇꜱᴘᴏɴꜱᴇꜱ
​
i'm rather active, you can probably expect a reply from me at least
once a day. if not every other day. i'm a third person writer for sure, and while i have a discord
i'd prefer to keep the rp to the forums. if you want to talk through discord however, just ask.
i've gotten rather good handle on what i like. a good mixture of supernatural, fantasy and/or domestic slice of life. Romance too, but it doesn't need to be
heavily centered. Angst and dark themes aren't my thing, that isn't to say i''m against drama overall. horror on the other hand...
i've got plots of my own, but a lot of them are based off dreams, so they
may seem a bit weird. but at the very least, they're somewhat thought out. my writing style is a lot
of description and thoughts, but i can run with dialogue if given enough to work off of- or get things
moving in a certain direction, just let me know.​
Have preferences/cravings? Suggest them and I'll see if I have any plots like that,
or we can make our own. 🖏 ​
​
​

Amadi sat in the back room of the house. It was the only safe place he had left. If even that anymore. He kept his eyes closed, his head down, his ears covered. He didn’t want to think about the things he’d done. Neither did he want to acknowledge the horrors that he’d brought from beyond reality. A place neither he nor the people he’d once known could understand. He didn’t want to think at all.

Yet, he could still hear the screams. He could hear the bodies hitting the hardwood floor when they’d gotten too close to the door behind him. Thinking they could reach salvation before being proven horribly wrong and dragged away by some unknown force. Their nails digging into the wood was a dominant sound. He could only imagine the way their fingers tried desperately to grasp at something, anything, only to be met with splinters in their bloodied fingertips. Amadi could hear the prayers and the begging, the cries to know why they were being forsaken. Their cries were for naught. They cried out to a silent god. At least, one that used to be silent. One who knew no loyalty, even to those who had done so much in its name- or what they thought it had been. Now, that name seemed empty and foreign.

It didn’t fit what he’d seen. Amadi had learned it truly had no name. No name, no allegiance, and very few but very important interests. Ones that had not lined up with that of its followers. He could not fault them. They had not known their god had been a trickster. One who wore a false mask, only for them to be devoured when it pried that facade away from its face. He wondered if he would die in the same way they were. Siphoned of his blood, with his organs and bones removed from lacerated skin, before what was left of his flesh melted together to make a fresh new body for a being that didn’t belong in this world. And he, himself, the maker of the chaos. He’d let it in because that’s what he’d been told he was to do. He was to be the lamb for the sacrifice. Perhaps it was his fault, his own selfishness had led him to beg for otherwise. He hadn’t thought that the others would have to be taken as equivalent exchange. Then again, perhaps the god was just hungry. Perhaps its gluttony knew little bounds, and he had simply gotten lucky off its pity. The rest had not.